A new magic exhibition, Gilded Age Magic, is on show through September 9, 2012 at the Hudson River Museum in Yonkers. The objects on view are drawn from the Rory Feldman and Bjorn Hanson collections, and include Thurston's original spirit cabinet. Here is the description from the museum website: 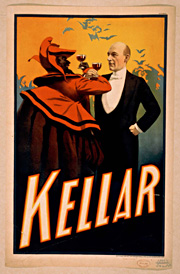 Modern stage magic has its roots in the Gilded Age showmanship of Harry Kellar (1849-1922), who performed around the world but made Yonkers his home between tours. With his theatrical spectacles, Kellar founded a “Royal Dynasty” of American magicians including Harry Houdini (1874-1926), a friend and colleague of Kellar’s later years, and Howard Thurston (1869-1936), with whom Kellar toured at the end of his career. These modern magicians cultivated a debonair stage persona that set them apart from earlier traveling sideshow artists, who dressed and posed as traditional Chinese conjurers. Despite the supernatural imagery on their posters, these magicians were not occultists but entertainers. Part of their audience appeal was the mystery of how their illusions were accomplished, not any claims to supernatural powers. The exhibition will feature vintage theatrical posters, costumes and magic ephemera from little seen private collections as well as planned performances in the galleries by local magician Benjamin Levy and others.


You can read more about Rory Feldman and his massive Thurston collection (he's Wild About Howard) in this New York Times article. I had the pleasure of meeting Rory at the Magic Collectors Weekend and he shared with me photos of some of his Thurston-Houdini treasures.

Click here for more information on Gilded Age Magic.
Written by John Cox at 7:32 AM