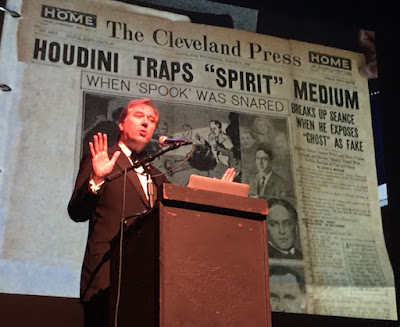 I give lectures on Houdini's life and career and I'm also available as a consultant or interview subject on any Houdini related project. I've given talks at The New-York Historical Society, UCLA, Hollywood Heritage, The Magic Castle, The Center For Inquiry, as well as schools, libraries, museums, and festivals. I've consulted on numerous books, plays, documentaries and exhibitions. To discuss your needs, please contact me.

Houdini in Early Cinema
It's not generally known that the great magician and escape artist Harry Houdini was also a pioneer of early cinema. Houdini filmed many of his death-defying escapes, starred in several films, and even ran his own motion picture studio. Now Houdini historian and blogger John Cox tells the amazing story of the world's most famous magician's involvement in early cinema. John's talk features dozens of rare photos and film clips of the real Harry Houdini in "Action!" [1 hour, but can be tailored to any length.] This talk can be combined with a screening of one of Houdini's silent movies.

Houdini Among The Spirits
Harry Houdini’s role as a skeptic and debunker of fraudulent spirit mediums is one of the most fascinating aspects of his remarkable career. Yet very few people understand the whole story. Was Houdini’s crusade really motivated by his mother’s death? What role did Sir Arthur Conan Doyle play? And what about the sensational claim that Houdini himself escaped the grave in 1929? Using photos, film clips and rare documentation, Houdini historian and blogger John Cox tells the story of how Houdini spent a lifetime among the spirits. [1 hour, but can be tailored to any length.]

This is a general talk covering all aspects of Houdini's amazing life and career using rare photos and film clips.Move beyond the many myths and discover the real Harry Houdini. You'll also hear the only known recording of Houdini's voice! [This talk can be tailored to any length.]

Bio
John Cox has studied the life of Harry Houdini for over 40 years. He consults on Houdini projects for radio, television, stage and film, and writes a popular blog devoted to the magician, WILD ABOUT HARRY (wildabouthoudini.com). A graduate of USC, John has written for film and television. He’s also a member of the world famous Magic Castle in Hollywood. John lives in Los Angeles where he writes his blog and is currently working on a book about Houdini's life and career.