Houdini’s Walk of Fame star gets a much needed restoration

While I was in Hollywood the other day I made a nice discovery. It appears Houdini’s star on the Hollywood Walk of Fame has received a much needed restoration.

Located on the North West corner of Hollywood Blvd. and Orange (across from the Chinese Theater and down from the famous Magic Castle), the star, which was dedicated on Halloween in 1975 and commemorates Houdini's work in film, has fared badly under the heavy foot traffic on this congested corner. The star had cracks, was gum encrusted, and the bracing beneath the letters had worn through.

Now the Hollywood Chamber of Commerce, as part of a $4.2 million Walk of Fame face-lift (which will see the restoration/replacement of 778 stars), has come to Houdini’s rescue and restored the star, which now looks as good as the day in was dedicated. 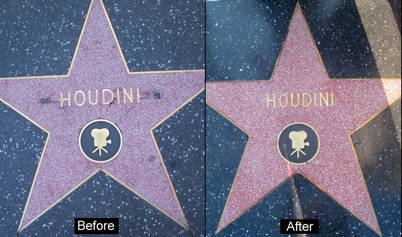 What better way to launch a new magic magazine than put the greatest magician of all time on cover? That’s what Black’s Magic Group has done with their inaugural issue of Magician.

This first issue of Magician features an extensive Q&A with William Kalush, co-author of the controversial The Secret Life of Houdini: The Making of America’s First Superhero

Curiously, the magazine does not appear for purchase at the Black’s Magic website. I found my copy (the last on the shelf) at good old Hollywood Magic.

Happy hunting.
Written by John Cox at 8:46 PM No comments: