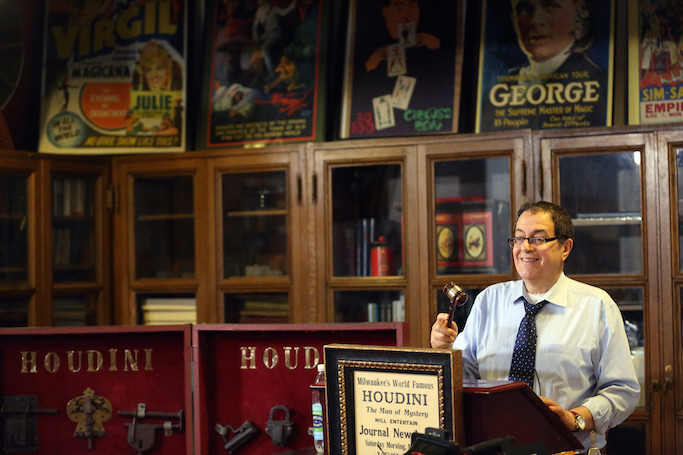 Yesterday RR Auctions sold some very nice Houdini items, including a rare lobby display for Houdini's The Man From Beyond. If you are wondering why I didn't report on this auction until after it ended, I wanted to explain my (somewhat loose) auction reporting "policy."

As a rule, I try not to report on auctions in progress. This is so my good friends in the magic collecting community don't get mad at me for outing that gem that might have been flying under the radar. I will report on such items after a sale, especially if they sold for a price that was unusually high or low. Whatever feels like "news".

Exceptions are when an item is of such historical significance that its very existence is news in itself. The recent Double-Fold Death-Defying Mystery box was an example of that. Also, if an auction house buys advertising, whether it be a sidebar ad or a sponsored post, then obviously their upcoming Houdini items will be covered. (Yes, I can be bought.)

The Man From Beyond lobby display was on the line for me. It is an important Houdini item -- one of only 4 such displays -- and it was definitely flying under the radar. It ended up selling for below the auction estimate (and well below what I think it's worth), so maybe keeping my yap shut helped a collector get a deal. But I'm actually feeling a little guilty today. I'm not sure I served Houdini's legacy or the larger collecting community by not announcing that this historic gem was available for all.

I'd love to hear some feedback on this. Should I have reported the display auction? What do you think should be WILD ABOUT HARRY's auction reporting policy?

Email ThisBlogThis!Share to TwitterShare to FacebookShare to Pinterest
Tags: Auction, Wild About Harry