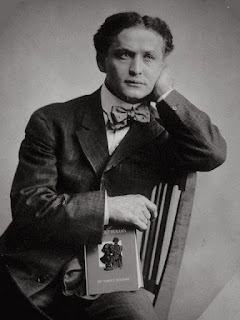 Houdini wrote several books, short stories, a novella, and numerous articles for magazines and newspapers. For some he employed ghost writers, such as H.P. Lovecraft and Walter B. Gibson (who would later create The Shadow). From 1906 to 1908 he published his own magic magazine, Conjurers Monthly. He also wrote script treatments for his movies and short plays to copyright his magic and escape effects.

Houdini was a major collector of books and material related to magic, spiritualism and the theater. He drew from his collection in his writings. In the dedication to his book, The Unmasking of Robert-Houdin, Houdini credited his father "who instilled in me the love of study and patience in research."

Books by Houdini:
The Right Way to Do Wrong (1906)
The Unmasking of Robert-Houdin (1908)
Handcuff Secrets (1910)
Miracle Mongers and Their Methods (1921)
Magical Rope Ties and Escapes (1921)
Houdini's Paper Magic (1922)
Elliot's Last Legacy (1923) - Editor
A Magician Among the Spirits (1924)
The Art of Escape (unpublished)
The Cancer of Superstition (unfinished)
Witchcraft (unfinished)