by Manny Weltman is generally considered THE master source for everything published under Houdini’s name. But now Houdini expert and mega-collector Arthur Moses has uncovered a review missed by the late great Manny.

Says Arthur, “I found another obscure article he wrote that's not listed by Manny; from the journal ‘Social Forces’ June 1926 v4n4, Houdini wrote a lengthy book review (although not very positive) for Haunted Houses written by Camille Flammarion.”

can still be purchased on Amazon.com.

The discoveries continue! Thank you, Arthur.
Written by John Cox at 1:15 PM No comments: 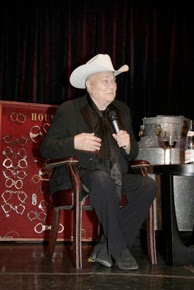 Sad news this morning. The AP reports that legendary actor Tony Curtis died yesterday in his home in Las Vegas from cardiac arrest. He was 85.

While Curtis had a long and storied career with such films as The Sweet Smell of Success, Spartacus, Operation Petticoat, The Great Race, The Defiant Ones, and Some LIke It Hot; he is most beloved by magic fans for his starring role in Paramount’s 1953 classic HOUDINI

alongside then real-life wife Janet Leigh.

Curtis recently hosted screenings of HOUDINI at the Million Dollar Theater in Los Angeles and at The Magic Castle (click here for my report on that memorable evening).

For a look back at his amazing life and career read the full report on his passing at NPR. 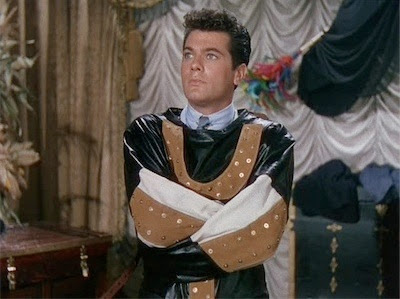 Houdini seance season is upon us

It’s almost October and you know what that means? It’s Houdini Seance season! Going to do my best to keep up with all the Houdini seances this year.

First up, we have “A Live” Houdini Seance in Milton Keynes, UK hosted by the RiPA. Full details on their official website HERE. The event also has a Facebook page.

Next, the Houdini Museum in Scranton is opening it’s annual Houdini seance to the public for the first time in 20 years. The Houdini Seance will be held in conjunction with a tribute to the great John Calvert. Those details can be found in the official press release HERE.

Of course, there is always the Official Houdini Seance (a serious attempt), but so far details of the 2010 seance (the 84th) have not been made available. Last year’s seance was held at the home of Anna Eva Fay with Nancy Garber as the medium.

This article first appeared on Houdini Lives.
Written by John Cox at 3:16 PM No comments:

Says Mick, “I have managed to build a working Bramah lock (with the help of Master Handcuff Builder Ian McColl of Australia). This now operates on the replica key I made a few years ago. So it is the most accurate reproduction yet.”


Mick has also produced a 20-page fully illustrated booklet on how the cuff was built called Looking into the Mirror. Price is $15.00 US or £10.00 UK with free worldwide airmail postage. Contact Mick at loxandkeys.com for payment details. 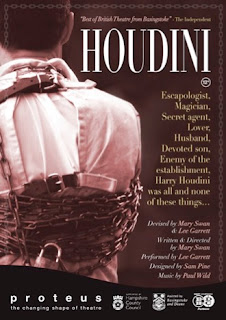 The award winning British theater company Proteus is currently touring the UK with their production of HOUDINI. The tour runs from September 17 to October 31, 2010.

Using Proteus' distinctive style of fusing physical performance, circus, magic and music Harry Houdini will be resurrected to tell his remarkable story of a truly self-made man and the myths that have made him a legend. Created by the artistic team behind the critically acclaimed The Elephant Man.


Visit the Proteus website for more info on HOUDINI.
Written by John Cox at 1:01 PM No comments: 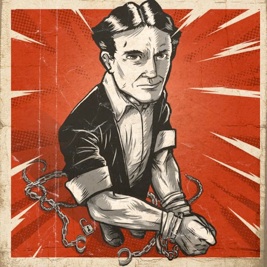 Houdini’s Last Escape, a blog for illustrators devoted to visually interpreting a chosen weekly theme, recently selected its namesake Houdini as its subject. The image above is by “Andy.”

Click here to see the other entries at Houdini’s Last Escape.
Written by John Cox at 3:00 PM No comments:

Email ThisBlogThis!Share to TwitterShare to FacebookShare to Pinterest
Tags: Artwork

Cremaster 2 at Cinema 21 in Portland 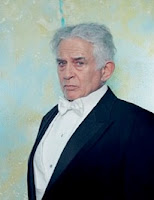 Matthew Barney’s experimental five-film series, The Cremaster Cycle, will be showing at Cinema 21 in Portland from Sept. 24-30.

Of course, Houdini buffs will be interested in the second film of the series, Cremaster 2, as it features Norman Mailer (left) as Houdini as Barney himself as murderer Gary Gilmore. Gilmore, the subject of Mailer’s bestselling book, The Executioner’s Song, claimed he was related to Houdini.

Cremaster 2 has never been released on DVD (as far as I know), so this is rare chance to see one of the more obscure (and bizarre) Houdini films.

Tickets can be purchased online at the Cinema 21 website.
Written by John Cox at 10:34 AM No comments:

The Amazing Randi spellbinds at The Magic Castle 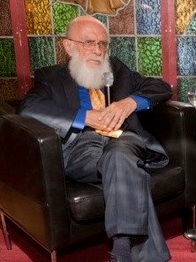 The interview, conducted in the Inner Circle before a standing room only crowd, lasted 2 hours, during which Randi told amazing stories of how he met the great Harry Blackstone as a boy, how he started his career an escape artist by happenstance, and of his various encounters with individuals who have come seeking his $1 million prize for genuine psychic phenomena. At 82, Randi looked terrific as was as quick-witted and energetic as ever. He is a true wizard!

The event was attended by many familiar faces from the magic/Houdini/escape community, including; Mark Wilson, Patrick Culliton, Joe Fox, Mark & Sheila Cannon, Mark Willoughby, Jeffery Abraham, and more. (Also a shout-out to magician Gary Morton who performed Houdini’s Needles in the Parlor of Prestidigitation after the event.)

Despite the record length, the interview seemed to only scratch the surface of Randi’s amazing career (unfortunately, Houdini wasn’t mentioned). So Maven put Randi “on the spot” by saying they would do a second evening with him as soon as it could be arranged. The suggestion met with the thunderous approval of the crowd and Randi himself.

After the talk, I was thrilled to be able to introduce myself to Randi and have him sign my copy of his terrific 1977 book, Houdini His Life And Art.

This looks like it could be fun. The Carnival of Lost Souls

by Laura Quimby promises to be the first adventure of “The Handcuff Kid”. Here’s the description from Amazon: 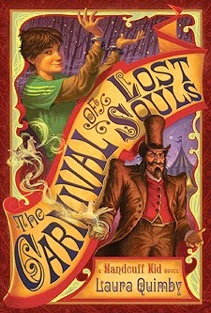 For one charismatic kid, the dangerous world of the Forest of the Dead becomes the setting for the ultimate escape trick in this exciting debut novel.

Jack Carr has been shuttled from foster home to group home to foster home his entire life. The only constant has been his interest in magic, especially handcuff escapes like those mastered by his hero, Harry Houdini. When he’s placed with the Professor, however, he feels like he’s finally found a home—but his new guardian is hiding a dangerous secret.

Years ago the Professor bartered his soul to the undead magician Mussini, and when the payment is due, he sends Jack in his place. Jack must travel with Mussini to the Forest of the Dead, a place in between the real world and the afterlife, where he’s forced to perform in Mussini’s traveling magic show. If he stays in the Forest long enough, he’ll die himself. To find his way home, he’ll have the help of Mussini’s other “minions”—kids stolen just like Jack—and his wits, nothing more. Can he follow the example of his hero, Houdini, and escape the inescapable?


The official released date for The Carnival of Lost Souls is October 1, but Amazon shows the book in stock now