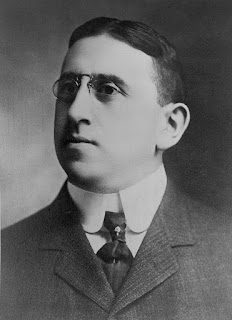 Born July 31, 1868, Martin Beck oversaw the western Orpheum vaudeville circuit under an agreement with B.F. Keith and Edward Albee who controlled vaudeville in the east. The men came to monopolize vaudeville, not just with their nationwide string of theaters, but also with an all-powerful booking agency that fed their own chains. With their prestigious theaters and nationwide influence, Keith-Albee Orpheum epitomized "the big time."

In 1899 Martin Beck, traveling with a party of sightseeing theater managers, saw Houdini at the Palm Garden Beer Hall in St. Paul, Minnesota. Beck sent a pair of handcuffs on stage to test the young "Handcuff King." On March 14, Houdini received a telegram from Beck offering him a spot on the Orpheum bill in Omaha, saying that he would most likely make him a proposition for the entire season. Houdini later wrote that the telegram "changed my whole life's journey."

Beck and Houdini finalized a three year management agreement that same year. It was Beck's idea to send Houdini to Europe in 1900 where he could build a name for himself. When Houdini struck it big in England, he decided to remain in Europe instead of returning to the U.S. and bought out his contract with Beck in 1901. While Beck no longer managed Houdini personally, the two men remained close friends and business associates and Houdini remained loyal to the Keith-Orphuem circuit for his entire career. Beck was an honorary pallbearer at Houdini's funeral.

Beck was also famous for building the Palace and the Martin Beck Theater (now the Al Hirschfeld Theatre) in New York City. He died on November 16, 1940 at age 72.

Houdini's brother Hardeen said, "Although many persons claim to have made Houdini, all credit should go to astute Martin Beck."