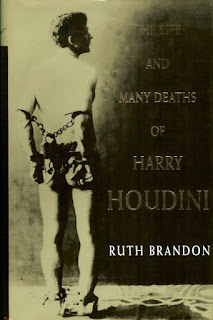 The 1993 biography The Life and Many Deaths of Harry Houdini by Ruth Brandon is maligned by Houdini buffs. This is largely due to Brandon's pet theory, as expressed in the book, that Houdini was impotent. Brandon admitted this notion was not based on any evidence, just a "guess." But she believed it was the best explanation of why the Houdinis never had children. This was promoted as the sensational revelation of the book, and the author repeatedly shared her theory on TV and in documentaries. It even found its way into popular culture via a mention on Seinfeld.

Of course, the reason the Houdinis didn’t have children had to do with Bess's inability to do so, something her niece, Marie Blood, said she would have shared with Brandon had the author shown any interest (I got the feeling that Brandon had rubbed Marie the wrong way). I’ve also heard whispers over the years that Brandon, who authored the 1984 book, The Spiritualists, had a pro-spiritualist agenda. However, I see no real evidence of this in the book itself. (Unless the idea of robbing the great debunker of his sexual power could be considered an attack?)

But if we move beyond the bedroom, I think The Life and Many Deaths of Harry Houdini has a lot to recommend it. Certainly in 1993 it was a very welcome book. It had been 24 years since the last major Houdini biography (Houdini The Untold Story by Milbourne Christopher), and while Brandon didn’t really break new ground, she nicely consolidated a lot of the important new research from smaller, individual studies. It provided Houdini buffs with a nice "everything we know up to now" biography while we waited for the great game changer, Houdini!!! The Career of Ehrich Weiss by Kenneth Silverman.

It's also a very well written book. In fact, for people who want an easy read on Houdini, it's still a biography I'd recommend, impotency theory and all.

The Life and Many Deaths of Harry Houdini was first published in Great Britain by Martin Secker & Warburg Limited in 1993. It would take a year for the book to find its way "across the pond" to the U.S. where it was published by Random House in October 1994 (although the U.S. first edition shows only the 1993 copyright date). Both hardcover editions featured very nice cover art. The UK art was designed by William Webb with a photo credit to the Radner Collection. The U.S. cover was by Mike Lam with photo credit to UPI and poster images from the Granger Collection.


The Life and Many Deaths of Harry Houdini has so far seen two paperback editions in the UK. The first was published in 1994 by Mandarin and featured a shirtless Houdini on the cover. The second came from Pan Books in August 2001 and offered up more conventional cover artwork. This later edition also separated the photos into two sections instead of having all in one central section as in all other editions.


The first U.S. paperback edition was published by Kodansha Globe in 1995. It had an attractive cover designed by Lilly Langotsky. A later reprint from Random House appeared in October 2003. It featured an entirely new cover design by Tamaye Perry, who made nice use of stills from Houdini's movies. This paperback is still in-print today and is available on Amazon.


In my collection, I also have two U.S. pre-publication editions of the Brandon book. The first is a proof from publisher Random House. A very different cover concept is shown inside along with a review from the London Times. The second is a curiosity; a trade paperback edition featuring artwork that would appear on the U.S. hardcover. It's likely this is an early export edition, typically sold in airports and overseas markets, although there's nothing on the book to indicate it as such.


Despite the controversy, The Life and Many Deaths of Harry Houdini, "the Brandon book", is a worthy biography that deserves a place on any shelf of Houdiniana, if for no other reason than for these great cover designs.


Enjoy these other selections from the WILD ABOUT HARRY bookshelf:
Written by John Cox at 12:21 PM