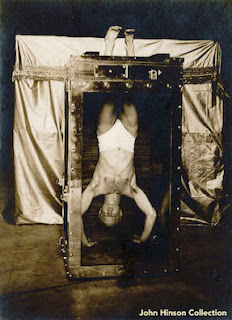 Houdini's first death-defying onstage water escape was his Milk Can. However, the Milk Can was widely imitated by other escape artists, so in 1912 Houdini introduced a far more difficult and dangerous escape that would become his greatest. He called it The Water Torture Cell.

In this escape Houdini would have his feat locked in a pair of heavy stocks and would be lowered upside down into a tank of water. In his earliest version of the escape, he was also encased in a steel cage. The cell would be concealed in a curtain cabinet, and after several suspenseful minutes (in which the orchestra played The Diver), Houdini would burst from the cabinet free. The cell would still be securely locked.

Houdini had his Water Torture Cell built in England at a cost of more than $10,000. The frame and heavy stocks were made of Honduras mahogany and nickel-plated steel with brass fixtures. The front consisted of a plate of half-inch tempered glass. The apparatus weighed around three-quarters of a ton and held 250 gallons of water.

Despite popular mythology, Houdini did not die performing his Water Torture Cell.

CLICK TO READ ALL POSTS RELATED TO THE WATER TORTURE CELL 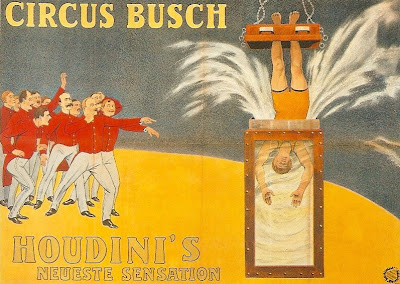