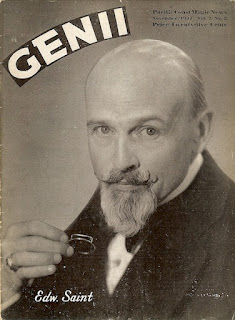 The man known as Edward Saint was born Charles David Myers on February 8, 1890. During his career he went by several names, including Professor Sesrad and Sir Edward St. Ra-Diem. But his most famous role was that of companion to Beatrice Houdini.

Saint lived a colorful life as a carnival barker and performer until he met the widowed Bess at New York's Playland in 1930. They later moved to Florida and then Hollywood. Some claim Bess and Ed were married but kept it a secret so as not to tarnish Bessie's marketable "Madame Houdini" image.

Saint worked tirelessly to promote Houdini's legacy and was the driving force behind the Final Houdini Seance in 1936. It is Saint's voice we hear imploring Houdini to come back on the recording of the seance. Saint also set-up several Houdini movie projects, but none came to fruition during his lifetime.

Some have suggested that Edward Saint is responsible for Houdini enduing fame, but that seems to be an overstatement. But he was the first in a line of what might be called Houdini evangelists.

Edward Saint died of pneumonia on October 22, 1942 at the age of 52. He is buried in an unmarked grave in Hollywood Forever cemetery.