Houdini vs. the Siberian Transport Cell Part I: The escape 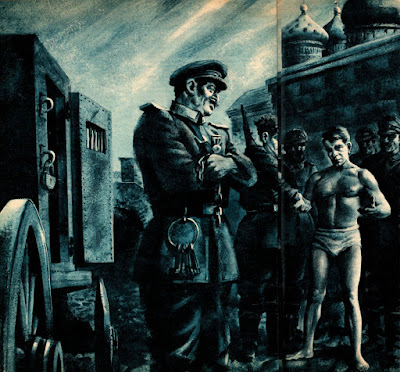 Houdini's escape from the Siberian Transport Cell or "Carette" in Russia on May 10, 1903 is one of his most famous and celebrated feats. No account of his life goes without a mention of it. But like the Mirror Handcuff challenge, the carette is an escape steeped in mythology and controversy over how Houdini managed to escape. So today we head to Moscow to unlock the mysteries of this famous challenge.

Houdini traveled to Russia in May of 1903. [For an account of his adventurous entry, read Breaking into Russia.] Houdini opened at the Yar, a popular Moscow dinner theater frequented by high society (where a drunken Rasputin once exposed himself). Houdini was an instant hit with his handcuff act, but he still wanted to perform an attention getting outdoor escape. He found his opportunity at Moscow's centrally located Butyrskaya Prison. 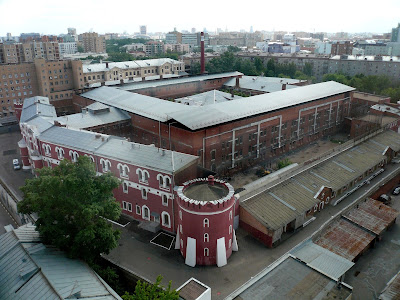 There's an amusing story of how Houdini was arrested while practicing his stage patter in an open Moscow park (some accounts say it was a deserted racetrack). As he recited in Russian how he "defied the police of the world to hold him," he suddenly found himself surrounded by police who feared he was a madman.

At police headquarters, the Yar theater manager explained things as Houdini endeared himself to the police by performing cards tricks. He then asked the Chief of Police, identified as "Lebedeff," if he could attempt to free himself from one of their prison cells. Lebedeff felt the locks on the Butyrskaya cells, which dated back to 1771, would be too easy for the jail breaker, and instead suggested their Siberian Transport Cell, a rolling "safe on wheels" used to send prisoners to Siberia. Lebedeff insisted it be a private test. Houdini agreed under the condition that Lebedeff provide an affidavit should he be successful.

Houdini arrived at Butyrskaya on May 10 with his newly hired assistant, Franz Kuklol. The police were ready for him. After having him remove all his clothes, they conducted the most thorough search of his career, as Houdini recalled:

All my clothes were taken from me and I was thoroughly searched, but, perhaps the word "searched" is too mild to describe what chief Lebedeff's spies did to me. I was laid on a table and one man started from my head and searched down to my feet, while another man started at my feet and worked up to my head. I was then turned round and about, being rather roughly handled. No doubt the spies wanted to impress their superiors, but they found nothing.


In a private letter to a friend (Don Turley) he added...

Talk about getting the finger, well I received it three times, but Mr. Russian spy found nothing.


Houdini was then led nude across the cold prison courtyard, manacled in heavy irons, and locked inside the transport cell after it had been thoroughly searched. Lebedeff then told Houdini that if he failed to escape, he would have to travel 21 days to Sackolin near Siberia where the only key that unlocked the door was kept. Houdini requested that the van be backed up against the prison courtyard wall so he could work out of sight of the police. This was agreed to. However, Lebedeff ordered two men with binoculars to spy on the escapist at work. 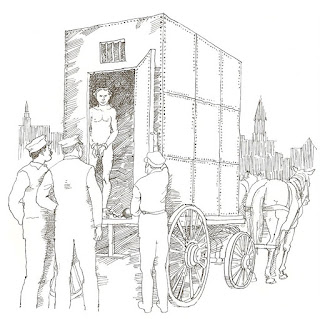 Within an hour, Houdini walked into Lebedeff's office free. He was drenched in sweat, despite the cold. The police rushed to the carette and found it still locked with the shackles inside. Lebedeff's spies had, apparently, witnessed nothing.

But instead of applause, Houdini was seized and again searched. When nothing was discovered, the police turned on Franz Kukol and subjected him to the same vigorous search. Finding Kukol's house key, they tried it on the carette door lock, much to Houdini's amusement. "They have a swell lock on the cell and the house key is a cheap lodging house lock, so you can imagine how little it fitted," he said. The police then photographed Houdini, "In case I turn out crooked."

Despite his promise, Lebedeff refused to provide an affidavit, and no Russian newspaper reported the escape. Nevertheless, word of the feat spread among the populace, and Houdini's Russian tour was extended. He even performed for the Grand Duke Sergei Aeksandrovich and the grand duchess at Palace Kleinmichel. (The duke was later killed when a revolutionary threw a bomb into his carriage.)

Houdini left Russia never to return. He recorded in his diary that he felt the country itself was "some sort of mild prison" from which he had "managed to escape." While he had no news clippings or affidavit for his successful carette escape, he later had a lithograph printed in Leipzig showing the dramatic scene that had played out in the courtyard of Butyrskaya prison. 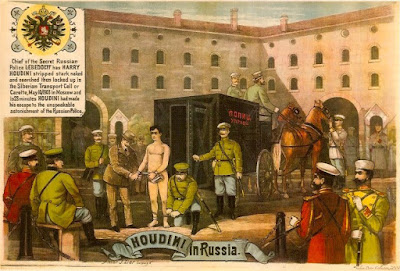 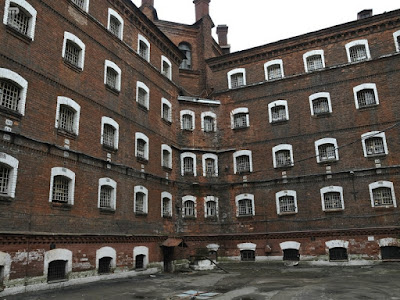 So how did Houdini escape from the Siberian Transport Cell? We will tackle that in PART II.

Top illustration by Peter Burchard from Saga, July 1958, courtesy of Arthur Moses. Houdini in van sketch by Ray Abel from Escape King: The Story of Harry Houdini (1975) by John Ernst. "Houdini in Russia" lithograph from the Nielsen Collection, MUM Nov. 2006.