The Independent reports that actress Rachel Weisz will be back in the UK next spring to film Death Defying Acts, a new film about Houdini. Weisz will play Houdini's mistress in the film.

The paper claims that Houdini "is a long-standing interest of Weisz's, partly motivated by the thought that he was a distant relative - he was born in Hungary as Ehrich Weisz."

Rachel Weisz related to Houdini? There is a bit of a resemblance.

Weisz is best known for her two blockbuster Mummy films, The Mummy (1999) and The Mummy Returns (2001), and can currently been seen in The Constant Gardener. 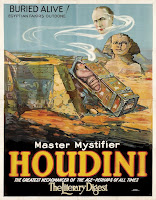 This poster promotes an escape that Houdini was just beginning to perform during the last season of his full evening show, which ended abruptly with his death in October 1926. The casket used in the escape was used to carry his body back to New York from Detroit.
Written by John Cox at 3:00 PM No comments: 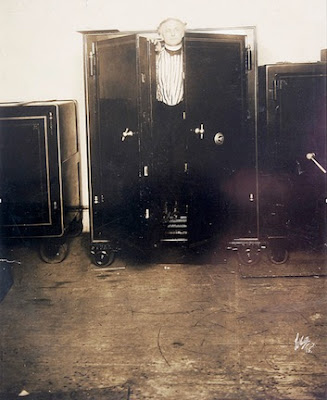 This post originally appeared on Houdini Lives.
Written by John Cox at 2:00 PM No comments: 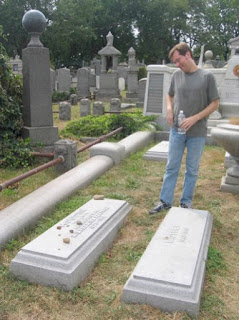 Meanwhile, the S.A.M. will hold it's annual Wand Breaking ceremony at Houdni's grave on Nov. 25 which marks the date of Houdini's death on the Jewish calendar.
Written by John Cox at 11:07 AM No comments: 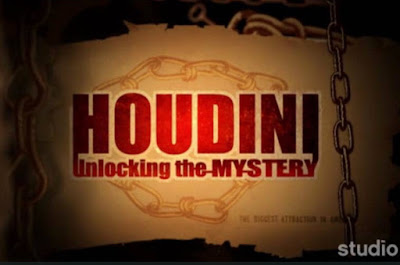 UPDATE: Houdini Unlocking the Mystery released on DVD.
Written by John Cox at 10:48 AM No comments:

A Houdini Action Figure has been released by Accoutrements -- "Outfitters in Popular Culture" -- who specialize in off-beat action figures of historical figures like Jesus, Einstein, etc.

The figure comes with hand and leg shakles, a chair with rope, and even a straight-jacket in which you can thrust old Harry up. The package notes our hero's "weapon of choice" -- MAGIC! 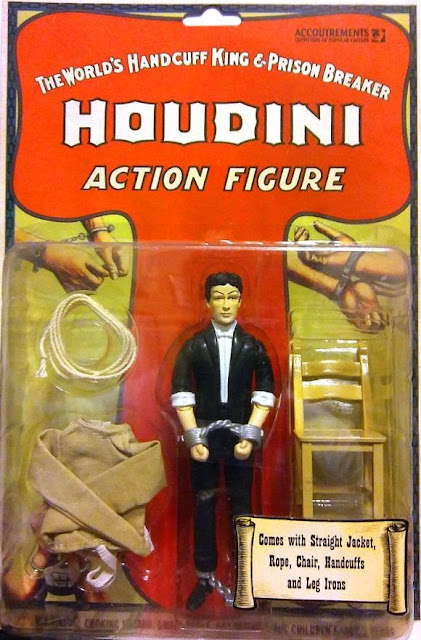 A new novel by by Gabriel Brownstein, The Man From Beyond

(not to be confused with the recent graphic novel of the same name), is based on the real-life friendship between Houdini and Sir Arthur Conan Doyle.

From the winner of the PEN/Hemingway Award, a debut novel featuring Harry Houdini and Sir Arthur Conan Doyle. 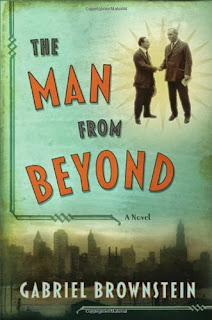 It is April 1922. Sir Arthur Conan Doyle arrives in New York on a spiritualist crusade. To packed houses at Carnegie Hall, he displays photographs of ghosts and spirits; of female mediums bound and gagged, ectoplasmic goo emerging from their bodies. In the newspapers, he defends the powers of the mysterious Margery, one of the most famous mediums of the day. His good friend Harry Houdini is a skeptic, and when Doyle claims Margery's powers are superior to Houdini's, the magician goes on the attack. Into this mix of spirit-chasing celebrities enters Molly Goodman, a young reporter whose job is to cover the heated debate. As she wanders into this world of spooks and spirits, murder and criminal frauds, Molly discovers herself: her true love, her place in the world; even her relationship to her beloved dead brother, Carl.


Would have been kind of cool if they had called this book The Men From Beyond.

You can purchase The Man From Beyond by Gabriel Brownstein from Amazon.com.
Written by John Cox at 8:26 AM No comments:


A modern condo now stands at the site of 305 East 69th Street where the Weiss family lived while Houdini was a teen. How ironic that this neighborhood which was once a refuge for poor Jewish immigrates is today among the most expensive places to live in New York City. Oh to be a slum lord with foresight in 1880!

Just up the street is the site of Mrs. Leffler's boarding house at East 79th Street where the Weiss family first stayed upon their arrival in New York. Incredibly, the building still stands and would be recognizable to Houdini today.

This post originally appeared on www.houdini-lives.com.
Written by John Cox at 9:00 AM No comments:

Hotel Shelton pool is no more 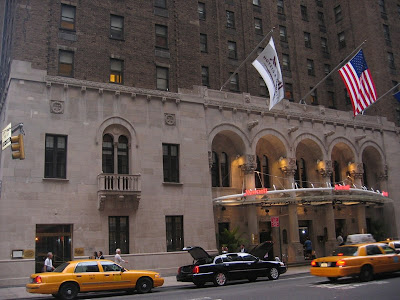 The Hotel Shelton in New York City is now the Marriott, but it still looks much as it did in Houdini's day. Even the hotel restaurant still bares the name "Shelton Grill."

However, I was disappointed to learn that the famous swimming pool -- where Houdini performed the remarkable feat of remaining submerged in a coffin with only minutes of air for over an hour -- is no longer there. Hotel staff told me the pool had been filled in about 2 or 3 years ago. 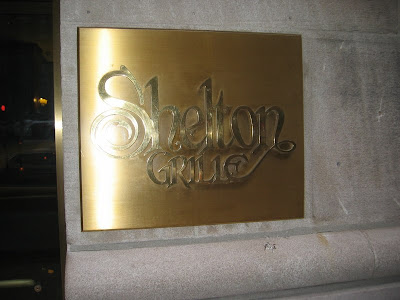 This post originally appeared on www.houdini-lives.com.
Written by John Cox at 8:57 AM No comments: 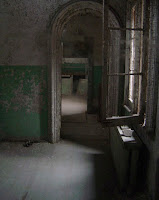 UPDATE: When 'Dead Famous' went in search of Houdini (full episode).
Written by John Cox at 6:11 PM No comments: 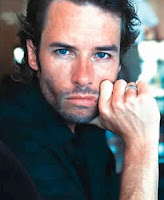 The film will be directed by Gillian Armstrong and was written by Tony Grisoni and Brian Ward.
Written by John Cox at 5:27 PM No comments: 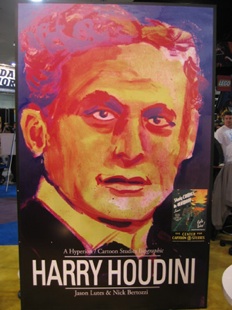 J. Gordon Whitehead revealed in 'The Man Who Killed Houdini' 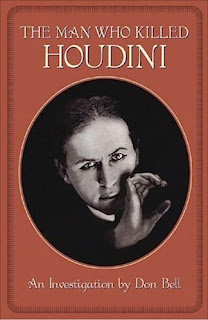 by Don Bell is a definitive investigation into the events that occurred in Harry Houdini's dressing room on Oct 22, 1926, and the man at the center of the fatal "attack," J. Gordon Whitehead. It is a remarkable work that will blow the minds of Houdini enthusiasts and magic historians.

Within the first few chapters, Bell rewrites Houdini history by discovering that the magician was attacked (or at least "tested") three separate times during that fateful week in Montréal. A native of Montréal, Bell finds independent eyewitnesses to each of these other, non-lethal punches. It's a stunning discovery.

Unfortunately, Bell doesn't investigate these other incidents in detail, but remains focused on the final famous dressing room attack by J. Gordon Whitehead. Bell's hypothesis is that Whitehead may have been acting as an agent for spiritualists. Considering Houdini's vehement anti-spiritualist crusade, this is not a far-fetched theory. Trouble is, absolutely nothing is known about J. Gordan Whitehead (and some have even questioned whether or not he even existed).

It's Bell's search for the phantom Whitehead (which takes up a good middle of the book) that presents my only criticism with the book. Bell describes in detail every step of his 20 year investigation, including his many false leads. Okay, dramatizing a few false lead is entertaining and adds to the detective story (not to mention makes the eventual discoveries all that more exciting), but Bell relates EVERY false lead, devoting whole chapters to lines of inquiry that never pan out. This does becomes a bit tiresome after a while.

However, when Bell finally gets on the right scent and starts uncovering the life and death of "the man who killed Houdini", the book again becomes fascinating. I won't spoil it, but somehow J. Gordon Whitehead turns out to be both a complete surprise and exactly what we would expect. Bell also tracks down the elusive eyewitnesses to the dressing room incident, Jack Price and Sam Smiley. Thank goodness Bell did this investigation when he did, as most of these key players are now deceased (as is the author himself).

In the end, Bell is never able to pin a conspiracy on spiritualists, nor link Whitehead to the movement. There is also a nagging feeling that there is still something untold in all this. But in this age of sensationalized conspiracy theories as entertainment, it's refreshing to finally get book that admits the truth of its own findings (even though this tends to relegate them to smaller publishers, as is the case here). But this honesty also legitimizes this book as a real investigation by a real investigator. And what Bell delivers in The Man Who Killed Houdini is far more interesting than any conspiracy, and of much greater value to the serious scholar of Houdini and magic history.

This book is a must. 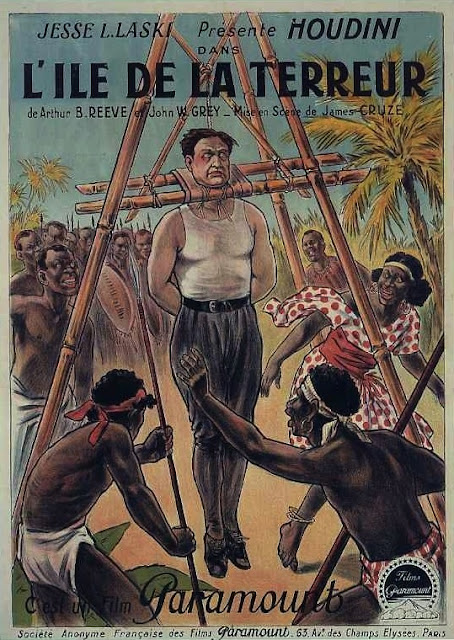 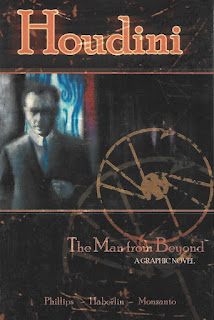 
You can purchase Houdini: The Man From Beyond from Amazon.com.
Written by John Cox at 9:50 AM No comments: