Today I continue my examination of books about Houdini using images and insights from my own collection (and in this case some additional images from the Arthur Moses collection). 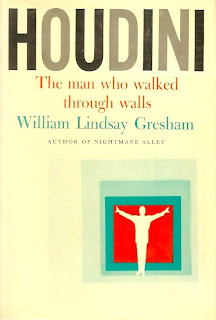 When Houdini: The Man Who Walked Through Walls by William Lindsay Gresham hit bookstores in 1959, it had been a remarkable 31 years since the last major Houdini biography. That last biography was Houdini His Life Story by Harold Kellock, a book notorious for being "full of lies." With his new biography Gresham took a quantum leap forward, washing away many of the Kellock fictions and unearthing essential new information. Indeed, I consider this the first great Houdini biography, and one that all subsequent biographies owe the biggest debt. It's also still the one with the best title.

It's in Houdini: The Man Who Walked Through Walls that Houdini's real birthplace and birthday is revealed for the first time. Gresham also dismisses as apocryphal almost all of the familiar boyhood tales (picking the lock on the pie cabinet, the locksmith apprenticeship); tells the true story of Harry and Bess's meeting and marriage; debunks the trapped under the ice story; reveals Martin Beck's involvement in launching Houdini's career; exposes some of the sordid details of the Arthur Ford seance; introduces us to Daisy White ("one of the most mischievous little minxes ever to be shot through a trap door"); and introduces a myriad of new Houdini facts that are now taken for granted.

There is also some information that remains still largely exclusive to this book, such as a one-off underwater straitjacket escape in the New York Hippodrome pool and Houdini's advanced plans for a crusade against gambling cheats "after mediums wore out." Gresham also shows great reverence for Jim Collins and the role he played in Houdini's life and career. He even goes as far to say: "Had Collins been in the dressing room that fateful day in 1926, Houdini might be with us yet."

Part of Gresham's success was because his sources in 1959 were excellent. Many of them knew Houdini personally. His Author's Acknowledgments cite: Joseph Dunninger, Walter Gibson, Will Goldston, Milbourne Christopher (and his collection of 500 Houdini letters), Sidney Radner, Robert Lund, John Mulholland, Jean Hugard, Fred Keating (the book includes two wonderful personal memories of Houdini from Keating), and even Houdini's assistant, Lewis Goldstein (likely the source of an untold story of Houdini going "berserk" when his dog was accidentally delivered to the theater instead of his trained eagle which traveled in a similar box). Gresham dedicates the book to James "The Amazing" Randi, who also helped greatly in Gresham's research.

Sure, Gresham still falls into a few familiar traps. He embraces Will Goldston's version of the Mirror challenge, with Bess crying the key out of the rep (although it's impressive that he questions the traditional version at all). He says Houdini escaped from the Russian Siberian Transport Van by cutting through the floor. He speculates on a method of the Water Torture Cell which we now know is incorrect (as we now know Sid Radner was withholding the real method from the author, which might have been wise as Gresham does reveal secrets in this book). He also reports that it was Houdini himself who survived the plane crash in The Grim Game, identifies J. Gordon Whitehead (whom he does not name) as a boxer, and includes the now discredited quote from "Jim Collins" saying that he put the ruler in the Margie Box.

Regardless, Houdini The Man Who Walked Through Walls is a top notch, well-written, and surprisingly accurate Houdini biography that provided a new and much needed fact-based foundation for magic historians to build on. It was also a book with a surprisingly long publication life.

Houdini The Man Who Who Walked Through Walls was first published in the U.S. as a hardcover by Henry Holt & Co. on August 3, 1959. The book would go into a second printing that same month, a third printing in October, and a fourth in January 1960. The book included several pages of photos, an "Opinionated Bibliography," and an Author's Acknowledgments in the front.


In 1960 Victor Gollancz, Ltd. published the book in hardcover in the UK. For some reason, the UK edition uses an image of Robert-Houdin on the cover. Hard to believe this could have been an error -- confusing Houdin and Houdini -- but I guess it's possible. The UK edition includes slightly different photos from the U.S.

Houdini The Man Who Who Walked Through Walls was first published in paperback by Hillman Books in June 1961. All new photos were used in the paperback edition, and the Author's Acknowledgments were moved to the back of the book.


Later paperbacks were published by Macfadden Books. Apart from different publisher markings, the only noticeable difference between the Hillman and Macfadden editions is the tinting of the photo of Houdini (credited to Dunninger) on the back. Macfadden released at least five printings. All use the same cover art, but show variations in price and the occasional inclusion of "Printed in the USA" on the back.


Houdini The Man Who Walked Through Walls doesn't appear to have been widely published outside the U.S. and UK. As far as I know, there wasn't even a UK paperback edition. However, there was a Dutch edition published in 1964 (update: Russian Gresham).


The 1970s saw the return of Houdini The Man Who Walked Through Walls in hardcover by what was now Holt, Rineheart and Winston. I don't know the publication order of their two later hardcovers for certain, but it seems logical that 1973 hardcover, which uses the same artwork as the first edition, came first followed by what is only described inside as an 11th printings with brand new cover artwork (this edition eluded me for years).


The last printing of Houdini The Man Who Walked Through Walls was a paperback by Manor Books in 1975 with all-new cover art. This was the first Houdini biography I ever bought and read, so this particular edition has always held a special place for me.


Houdini: The Man Who Walked Through Walls has now fallen long out of print, and that's a shame. Sure, some of the information is now out-of-date, but by and large it's a very solid Houdini biography and one that should always be remembered as a milestone. Even the great Max Maven once called it "the best of all the Houdini biographies." Some kind of collectible Anniversary Edition would not be unwelcome one day.