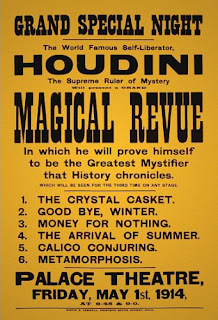 In 1914, Houdini launched what he called his Grand Magical Revue. While he always performed magic during his escape act (the Needles for example), this was the first time since his earliest days as a performer that he made magic the central focus of a show. Houdini billed this as a unique and special event and adopted a new moniker: "The Supreme Ruler of Mystery."

In the show, Houdini performed tricks like Good Bye Winter, Money For Nothing, and even the Egg Bag. He did card magic, with playbills proclaiming him as "The Greatest Sleight of Hand Performer the World Has Ever Seen." He even revived Metamorphosis with Bess. One famous feat that he presented was De Kolta's Expanding Cube. But the effect proved problematic and he only performed it a couple of times.

Houdini alternated his Grand Magical Revue with his escape act as he toured the UK in the Spring of 1914. While he deemed it the "best show I ever presented," theater managers and the public seemed to prefer Houdini the death-defying escape artist. Houdini ceased performing his Grand Magical Revue after only a handful of performances.

Below is a list of known performances of Houdini's Grand Magicial Revue:


CLICK FOR ALL POSTS RELATED TO THE GRAND MAGICAL REVUE