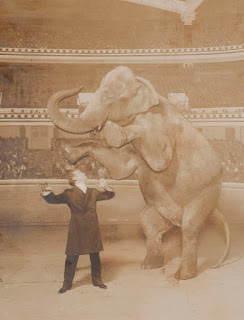 One of Houdini's most famous magic feats was vanishing a live elephant. Houdini performed the trick during a record-breaking 19 week engagement at the enormous Hippodrome Theater in New York in 1918. He revived it in 1922 at the Time Square Theater in New York for a post show promoting his film, The Man From Beyond (he used a smaller elephant for this smaller venue).

In the effect, an elephant named "Jennie" was ushered into the rear of a large cabinet decorated as a circus wagon (the Hippodrome review show, "Cheer Up!", was circus themed). The cabinet was closed and the front turned to the audience. On Houdini's command, both front and back doors were dropped open to reveal a round opening through which you could see the back of the stage. The elephant was gone.

Houdini reportedly developed the idea for the vanishing elephant from an effect called the Disappearing Donkey created by Charles Morritt. However, to this day, no one knows exactly how Houdini accomplished his trick. There is only one surviving photo of Houdini with his elephant (above). Frustratingly, there are no surviving photos of the cabinet or apparatus Houdini used during the performance. In more than one way, the vanishing elephant remains one of Houdini's great mysteries.

100 years ago Houdini vanished an elephant

CLICK FOR ALL POSTS RELATED TO THE VANISHING ELEPHANT