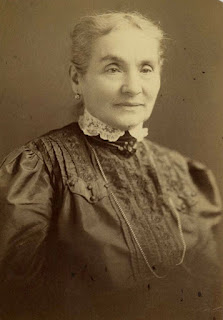 Houdini's mother, Cecelia Weiss (often misspelled Cecilia), was born Cecelia Steiner on June 16, 1841. When she was 22, she married Mayer Samuel Weisz, who was 13 years her senior and had one son from a previous marriage. The couple lived at Rakos arok-Gasse No. 1 in the Buda section of Budapest, Hungary. Their first child died.

Cecelia gave birth to Natan Josef (Nathan) in 1870. Gottfried Vilmos (William) followed in 1872. Then on March 24, 1874, Cecelia gave birth to Erik, who would go on to become Houdini. (Harry's sister claimed there was an earlier "Erik" who died in childbirth.) Ferencz Deszo, a.k.a. Theo Hardeen, was born on March 4, 1876.

In 1878 Cecelia and her children immigrated to America aboard the German steamship Frisia, reaching New York on July 3 of that year. In America the spelling of the family name became Weiss. Mayer Samuel had travelled ahead and secured work as a Rabbi in Appleton, Wisconsin. It was here Cecelia gave birth to two more children; Leopold David (1879) and Carrie Gladys (1882). After Rabbi Weiss lost his job, the family move to Milwaukee and fell into poverty. Cecelia was widowed in 1892.

Houdini was enormously close with his mother from childhood through adulthood. He considered her a "Saint" and honored a deathbed promise made to his father to always look after her. In 1904 he moved her into a large new family home at 278 West 113th Street in Harlem. He once even requested his salary in gold coins, which be poured into his mother's lap.

Cecelia never learned English. She and Houdini communicated in German. Despite being the wife of a Rabbi, Cecelia did not speak Yiddish (according to Bess Houdini). She understood German, French, Italian, Spanish and Hungarian only. Also despite what has been dramatized in some biopics, there was no conflict between Cecelia and Bess. Cecelia later became close with Bess's mother, Balbina, who was also a German speaking widow with five children.

Cecelia Weiss died on July 17, 1913 after suffering a stroke while on vacation with Hardeen in Asbury Park, New Jersey. Her funeral was delayed so Houdini could travel back from Europe to see her one last time. In her coffin he placed the last thing she had asked for; a pair of woolen slippers size six. She is buried amid her family in Machpelah cemetery in Queens, NY.