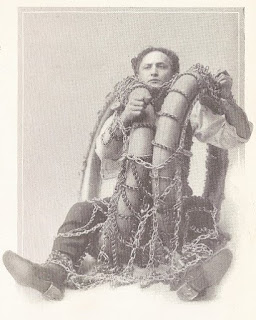 One of Houdini's most visually spectacular escapes was when he was challenged to free himself from chains provided by the Weed Chain Tire Grip, Co. Houdini accomplished the feat on April 10, 1908 at the Keiths Theater in New York City.

The image of Houdini in the "grip" of the weed chains is a famous one. Houdini would make good use the dramatic photos in his pitchbooks, and the image of him laying flat has gone on to appear in many biographies. However, details of the escape itself have always been somewhat scant.

) sends over the Weed Chain Tire Grip Co's own account of the challenge from their company pitchbook, The Weed. One interesting revelation is that Houdini repeated the escape a second time in Philadelphia.

Is it just me, or does it sounds like Houdini wrote this article himself? Enjoy.

Thank you, Arthur!
UPDATE: The Weed Chain rematch
Written by John Cox at 7:29 AM