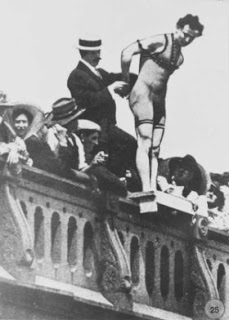 One of Houdini's most spectacular outdoor escapes was jumping manacled from a bridge or pier and freeing himself while under water. The escapes would draw thousands of onlookers and garner headlines in the papers. Houdini performed what he called "bridge jumps" in all the major cities he played throughout his career.

Despite popular legend, Houdini never jumped from a bridge through a hole cut in the ice of a frozen river.

Below are links to coverage of a few notable Houdini bridge jumps.


CLICK FOR ALL POSTS RELATED TO HOUDINI'S BRIDGE JUMPS