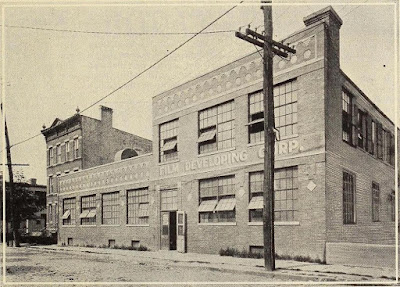 It doesn't get much attention in biographies, but the Film Developing Corporation, a.k.a. FDC, was a major part of Houdini's (and Hardeen's) life from 1916 to 1925. It also marked Houdini's entrance into the movie business, albeit behind the scenes. While the FDC is today forgotten, the building that housed it remains. But we'll get to that.

Houdini formed the Film Developing Corporation on September 25, 1916. Opening a film lab was, in theory, a good investment. Movies were exploding in popularity, and even threatened to supplant vaudeville. And here at last was a way for Houdini to earn a steady income without having to tour. There was a fair amount of competition. But the FDC promised a faster, cheaper process for developing motion picture film using machinery and chemicals worked out by an aniline dye expert named Gustav Dietz. This was at a time when most film developing was still done by hand.

The executive offices for the FDC were located at 22 West 42nd St. in New York, while the film plant itself was located across the river at 216-222 Weehawken Street in Hoboken, New Jersey. Houdini was President, Hardeen Vice President, and Alfred Davidson Secretary and Treasure. Houdini took his new role seriously enough that on his 1918 draft registration card he listed his profession as: "Actor / Manager, Film Factory."

The December 20, 1920 issue of Motion Picture News gave a nice description of the FDCs laboratory operations:

On the west shore of the Hudson not far from the center of Hoboken the laboratory of the Film Developing Corporation is running full blast. The laboratory under the direction of Messrs. Houdini, Hardeen and Davidson has forged ahead by its production of work of high quality until it occupies a position as one of the leaders in the fine film development.

Although the interior of all laboratories are much the same as far as equipment and procedia are concerned, the Film Development laboratory offers some refinements in these respects. Particularly impressive is the roominess of the separate departments. Instead of having many machines in a close space with little room for expansion, there is plenty of space in every direction.

In the printing room, for instance, there is room for 15 to 20 printing machines, and a like amount of spaciousness is found in the performing department. Three projectors, two Simplexes and a Baird, are used to prove each foot of film before being sent out.

But probably the most interesting parts of the Film Developing plant are the automatic developing machines. There are three of these automatics, a small negative machine and two mammoth positive machines. Through the use of these machines, it is possible to pass films from printing machines through the various developing and drying processes without being touched by the human hands. The drying drums are totally inclosed and fed with perfect conditioned air.

In personnel the laboratory is especially fortunate tin having workers long experienced in handling of film. Superintendent Flosse has been identified with laboratory practice for many years. Mr. Joseph Leighton is an expert negative developer. Miss Madelaine Keough is floor lady, and Miss Sohns is in charge of the printing department.

The Film Developing plant has been laid out for an ultimate capacity of 1,500,000 feet weekly.


Personnel and titles would change during the first few years of the company. Nathan Saland, who had experience running film labs, was brought in as Vice President and Hardeen became Secretary and Treasurer.

Houdini had convinced his brother to leave the stage to help run the business. Hardeen's true feelings about surrendering his successful stage career for a desk job are not known. But a profile of Hardeen in the "Equipment Services" column of Motion Picture News chirpily noted:

Mr. Hardeen's executive ability has had much to do with the success of the firm in which he is interested. His long experience in the stage has given him a personality which aids him in handling employees. And strange as it may seem to view of the fact that his present work is much less exhilarating that the one which made him famous he has become thoroughly absorbed in his laboratory and only on rare occasions such as benefits does he drop his robe of business and take up the secrets of tricks of the magician.


The FDC had some notable clients, including Famous Players Lasky who would later produce Houdini's The Grim Game and Terror Island. The FDC also developed First National's innovative newsreels called "Kinograms". When Houdini formed his own production company, the FDC did all the processing for his two feature films, The Man From Beyond and Haldane of the Secrets Service. According to "Houdini's Ghost" Patrick Culliton, the lab also pioneered the concept of "Film Dailies", turning around shot footage within 24 hours for the film company to review.

With Houdini at the helm, it should comes as no surprise that the FDC aggressively advertised themselves, primarily in trade publications. Below are two such ads from 1919 and 1923. 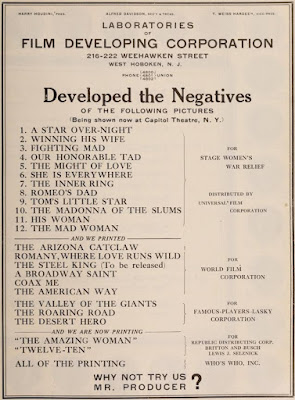 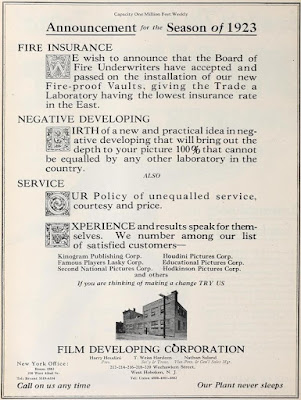 Unfortunately, the FDC was problematic almost from the start. Dietz's special chemicals proved highly corrosive to the machinery. The war also affected the supply of chemicals needed for the automatic developers, and "rather than chance it with results not quite up to the standard" they shut the machines down. Profits proved elusive. To cover mounting expenses, in 1921 Houdini created a real estate holding company called The Weehawken Street Corporation, naming Bess Vice President. Through it he purchased the building for $35,000 and then rented it back to the FDC for $541 a month. This accomplished little. As Ken Silverman noted in Houdini!!! The Career of Ehrich Weiss, "Houdini was out of his depth in this financial wheeling-dealing."

Then there were the lawsuits. A former manager, Arnold de Biere, sued the company for $2600 in unpaid salary. The case was settled out of court for $2000. The FDC was also hit with an ugly lawsuit by rival Powers Film Products, who claimed, falsely, that the FDC was a foreign owned company. The charge made news causing deals to collapse and some customers to withhold payments, one for $8000. Houdini filed a $25,000 countersuit for damage to the company's reputation.

Among the FDC stockholders was magician Harry Kellar, who had cautioned Houdini early on "not to go too deep into it as you have worked too hard for your money to throw it away." Now Kellar grew concerned that if the FDC went bankrupt, he'd be held libel for its debts. Houdini persuaded him to not sell his 125 shares and granted him the power of attorney. "I'm not worried about losing my money in the FDC," he wrote to Kellar, "but would certainly worry about losing your friendship."

The FDC and Houdini soldiered on, expanding and installing new equipment in 1922. But business didn't improve, and the following year two shareholders filed a lawsuit against Houdini and Hardeen for mismanaging the company.

The stress of the business took its toll on Hardeen who had to have surgery for ulcers. But even with the weight of the FDCs problems, Houdini still found time to tour, make movies, lecture, write books, and launch his campaign against fraudulent spirit mediums. But with Houdini's waining interest in even his own motion picture productions, in 1925 he at last threw in the towel.

In November 1925 Nathan Salad resigned as Vice President and set up his own Saland Film Laboratories. The Weehawken Street Corp. folded that same year, and the FDC appears to have remained in existence in name only. Houdini now used part of the building as his workshop. Two famous photos show Houdini and his assistants at work inside the building, which are the only images of Houdini at the Weehawken site (as far as I'm aware).

In January 1926, G. Bert Ward leased the lab and it became the Ward Cine Laboratory. After Houdini's death, the FDCs equipment was sold to Seiden Camera Exchange. This appears to have been the official end of the Film Developing Corporation.


But it was not the end for the Weehawken Street building. Happily, the building still exists today. The address is now 216 19th Street in Union City, NJ. (I visited it last year.) While modernized, it still retains its familiar structure inside and out, and would be recognizable to Houdini today. It's now a rental space frequently used for film and television work. Aware of the Houdini connection, the owners have dubbed the building "Houdini Studio." 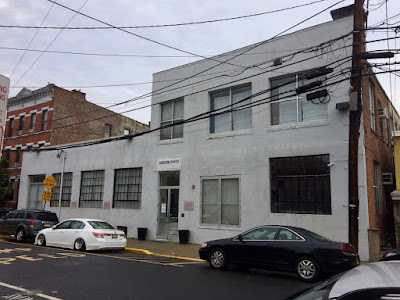 A postscript to all this. One of Houdini's fellow Scientific American spiritualist investigation committee members was Daniel F. Comstock who had founded the Technicolor Film Laboratories also in 1916. One wonders if during their down time the conversation veered from ectoplasm to the shared frustrations of being a "Manager, Film Factory."