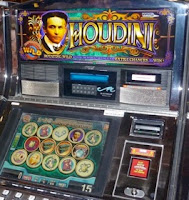 Think you’ve seen it all? So did I, until I stumbled on these Houdini slot machines at the Mirage hotel and casino in Las Vegas.

Actually, I’m not even sure what kind of machines these are. All I know is they made my money disappear like magic. Two helpful women playing beside me told me these were “penny slots.” They also pointed out that I was unusually unlucky.

Well, not too unlucky, because I was thrilled to have lucked into finding these! Here are a few more pics (which I later discovered I was not supposed to take). Enjoy. 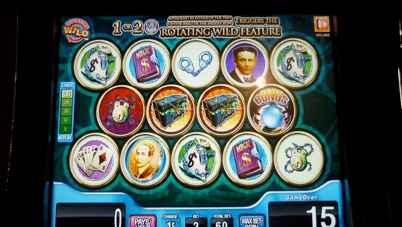 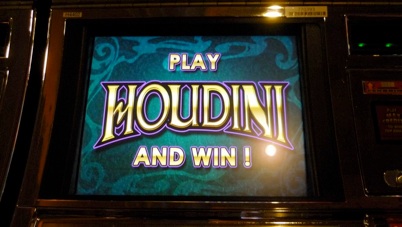 Death Defying Acts DVD gets new packaging and a subtitle


The new tag-line “Magic is Inescapable” -- instead of "Love is Inescapable" as used on the film poster -- has been retained, however, it appears the DVD will no longer be marketed under The Weinstein Company’s classics label, The Miriam Collection.
Written by John Cox at 4:34 PM No comments:

Having claimed to have made contact with Houdini’s spirit, Canadian TV and radio medium Kim Dennis (aka "Clairvoyant Kim" aka "Antiques Psychic") was unable to prove it at a seance conducted at the Houdini Museum in Scranton.

According to the press release issued by the museum, Dennis asked if anyone had questions for Houdini. Jeff Blood, a living relation, presented a health question only Houdini would know. Ms Dennis she said she’d answer later, but never did.

Curator Dick Brooks then brought out three questions sent by celebrated psychic investigator James Randi, whose answers were in a sealed envelope. Dennis would not consider the questions, abruptly stopped, and angrily walked out, never to return. 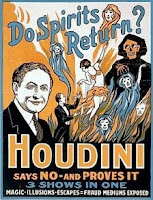 Event organizer Dorothy Dietrich, said, “We have it all on tape. If she were truly psychic she'd have known these questions were forthcoming. Many have tried to contact the great Houdini since he died in 1926 but none have succeeded.”

Dennis refused to appear for a TV cameraman from network affiliate WYOU TV who arrived later to interview her. Instead, the press release states, “she ran up the stairs to the parking lot and got in her car.”

Dennis stated on her website, “I travelled to heaven where I was sometimes taught by a guide, but did not appear to have their help on this occasion.”
Written by John Cox at 10:48 AM 1 comment: 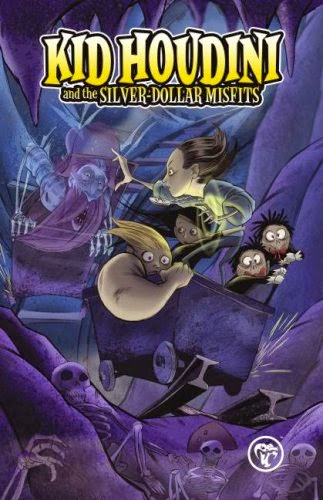 has been released as a 90 page Graphic Novel by Viper Comics.

Written and created by Dwight L. MacPherson, Kid Houdini and the Silver Dollar Misfits is set in 1886 and tells the fictional adventures of Houdini’s days a runaway.

Purchase Kid Houdini and the Silver Dollar Misfits at Amazon.com.

This article first appeared on Houdini Lives.
Written by John Cox at 8:18 PM No comments: 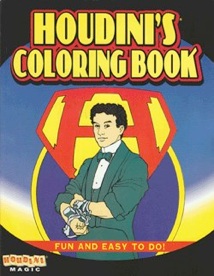 CLICK HERE to purchase Houdini’s Coloring Book from Houdini’s Magic shop online.
Written by John Cox at 10:15 AM No comments: 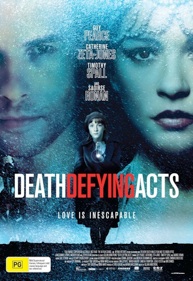 Death Defying Acts, starring Guy Pearce as Houdini and Catherine Zeta-Jones as a Scottish psychic, opens today in the UK.

Death Defying Acts played a VERY limited engagement in New York and Los Angeles last month. I’m not sure how wide this UK release will be, but it is currently playing in cinemas of the Odeon chain.
Written by John Cox at 4:48 PM No comments:

Charity event at the Houdini Estate 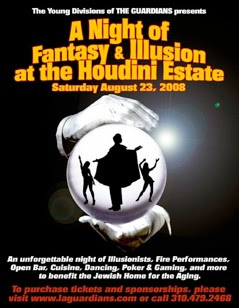 The fabled "Houdini Estate" in Laurel Canyon CA will be the site of what sounds like a pretty magical charity event on August 23, 2008.

The Guardians Young Divisions invite you to enjoy "A Night of Fantasy and Illusion at the Houdini Estate; an unforgettable night of astonishing live entertainment -- including fire performances and illusionists -- as well as an open bar, fine cuisine, dancing, Poker and gaming, and more!!"

The event will take place on August 23, 2008 from 8pm to 1am, and will benefit the residents of the Jewish Home for the Aging.

Click here to purchase tickets (I just got mine). Hope to see you there!
Written by John Cox at 10:49 AM No comments: