The many lives of Houdini on film and television 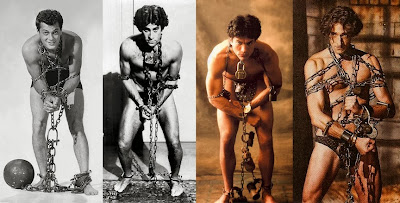 Houdini's story is natural for movies, and for many years following his death Hollywood worked on bringing the story of life to the silver screen. RKO, Columbia Pictures and Paramount all had movies in development throughout the 1930s and 1940s. But it was Paramount who finally released the first big-screen biopic, Houdini (1953), starring Tony Curtis and Janet Leigh. Houdini was big bold Technicolor treat that played fast and loose with the facts, but nicely showcased magic and its attractive married stars.

It would be decades before the next Houdini biopic appeared, and that would be on television. The Great Houdinis starred Paul Michael Glaser as Houdini and Sally Struthers as Bess. The 1976 film told a highly fictionalized story of Houdini personal life. In 1987 Disney offered Young Harry Houdini with Wil Wheaton as Ehrich Weiss. Houdini then returned to the big screen in 1997 in FairyTale: A True Story. The film told the story of the "Cottingley Faries" with Houdini being played by Harvey Keitel.

Cable station TNT gave us an "extreme" Houdini with Johnathon Schaech as the escape king in 1998. Guy Pearce played Houdini in the 2008 movie Death Defying Acts, which told an entirely fictional story of Houdini's affair with a Scottish psychic played by Catherine Zeta-Jones. In 2014 the HISTORY channel launched a two-night Houdini miniseries with Oscar winner Adrien Brody as Houdini and Kristen Connolly as Bess.

The last major screen incarnation (for now) was a 10 episode television series called Houdini & Doyle with Michael Weston and Stephen Mangan in the title roles. The series featured the famous friends investigating paranormal mysteries in 1901 England. Although well-made and entertaining, the series only lasted one season.