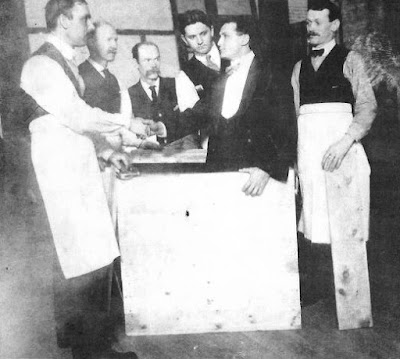 The escape Houdini did more than any other during his career was the Challenge Packing Case escape. Houdini would be challenged (or arrange to be challenged) by the shipping department of a local business to escape from a packing crate specifically constructed to hold him.  These escapes were performed onstage.

With Houdini inside, the packing case would be nailed shut and encircled with ropes (which would sometimes also be nailed to the crate). Audience members were invited onstage to drive their own nails into any part of the crate they wished. The crate would then be concealed inside a curtained cabinet. Within minutes, Houdini would emerge free and the crate would be shown to still be sealed.

Often Houdini would accept a second challenge if the company complained that the case might have been tampered with after it had been delivered to the theater (where it would be displayed in the lobby in the days leading up to the escape). In these "rematches", the case would be constructed on-stage in full view of then audience. But still Houdini escaped.

Houdini first performed the challenge packing case in Germany in 1902. He continued to perform the feat almost weekly right up to his death in 1926. The tie-in advertising with the local firms ensured newspaper publicity.


CLICK TO SEE ALL POSTS RELATED TO CHALLENGE ESCAPES