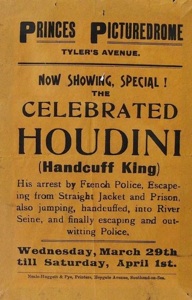 Being a fan of Houdini’s movie career, I can’t believe I’ve never noticed this until now (and maybe I’m alone in this, so collectors forgive me if this is old or obvious news to you).

This English playbill, which appears on page 26 of Walter Gibson’s The Original Houdini Scrapbook

Why do I think this?

According to the Nore Lodge website, Princes Hall, a variety theater on Tylers Ave in Southend-on-Sea, changed its name to Princes Picturedrome (as we see in the ad) in 1908 when it converted to all movies.

Furthermore, look at that plot description. It is CLEARLY Les merveilleux exploits de Houdini à Paris, a film Houdini made in France for Film Lux in 1909. Here the movie title has been translated as The Celebrated Houdini.

While Houdini showed footage of his escapes as part of his stage show, this is the first playbill I’ve ever seen advertising a performance of stand alone Houdini footage, and it’s the only advertisement I’ve ever seen for Merveilleux Exploits.

One wonders if fragments of this version, which probably had all the French title cards chopped off, is what’s now housed in stock film archives as miscellaneous Houdini footage (and most recently appeared on Kino’s Houdini The Movie Star DVD collection

UPDATE: I've been able to determine that this playbill is from 1916.
Written by John Cox at 9:28 AM 2 comments: 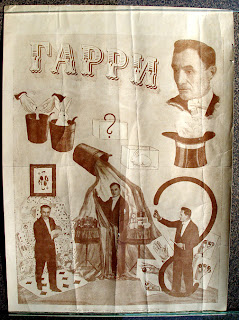 A dealer in Russian memorabilia is selling on eBay what he claims is a rare poster for a 1938 Russian movie about Houdini. Price: $400.

I’ve never heard of a Russian Houdini movie, and to my eye this looks more like a regular magician’s poster than a cinema one-sheet. There’s nothing escape related pictured, and while I don’t read Cyrillic, comparing the name on the poster to the cover of the Russian edition of The Secret Life of Houdini, I don’t think it even says Houdini.

So while I’m pretty certain this poster is bunk, I can’t help but be intrigued by the possibility of a Russian Houdini movie from the ‘30s. If anyone has any info on this, let me know.

UPDATE: The seller has provided me with an explanation why he’s listing this as a Houdini movie poster:

Hello. The poster doesn't have any info on it except name "Gary". It is definitely about Houdini - clearly visible from the design and name on it. The person on the poster looks like Houdini but definitely not him. So I think it is an actor who plays his role. It is from 1938, which means the poster can't be from Houdini performance because he died in 1926. So I am sure it is a movie poster about Houdini. Unfortunately I don't know when and who did that movie... Thank you. - motka

Check out this October 2002 issue of Ripley’s Believe It Or Not: Dead Men’s Tales by Dark Horse comics featuring a terrific Houdini cover. 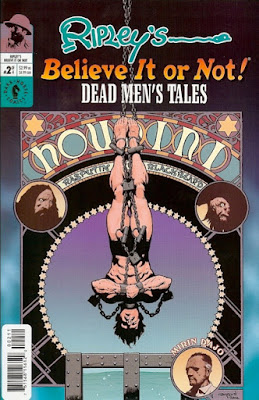 The story inside connects Rasputin, Blackbeard, Mirin Dajo (the “invulnerable man”) with Houdini in the afterlife -- believe it or not!
Written by John Cox at 3:02 PM No comments: 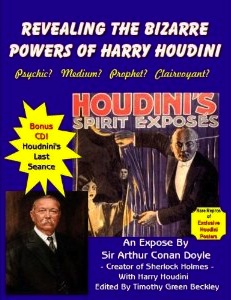 This one slipped past me when it was released on March 22, but Amazon has a listing for Revealing the Bizarre Powers of Harry Houdini: Psychic? Medium? Prophet? Clairvoyant?

, a book and CD combo edited by Timothy Green Beckley.

The book is temporarily out of stock and the Amazon description doesn’t really help explain exactly what this is. It’s possible it’s a collection of public domain material by Sir Arthur Conan Doyle and Houdini, cobbled together into a provocative package. There also is the promise of “Rare Repos of Elusive Houdini Posters” on the cover (which otherwise doesn’t inspire confidence).

I’ve placed a backorder, but if anyone has a copy and can give me a run-down on what it is (or warn me away), I’d appreciate it.

UPDATE: Okay, having received no warnings, I now have the book in hand. This is basically a reprinting of Houdini’s 1924 book, A Magician Among The Spirits

, with reprints of several articles by Sir Arthur Conan Doyle as a “rebuttal.” It also contains an essay on the Houdini-Doyle relationship by Green Beckley, and is illustrated with many photos and news-clippings (a few clippings I’ve never seen). The Bonus CD is the complete recording of the Final Houdini Seance narrated by George Boston and first released on Hudson Records in 1950.

It’s actually better than I expected and well worth having. The Doyle article alone is a must read.
Written by John Cox at 9:38 AM No comments:

Did this Medium have a ghostly encounter at Houdini’s grave? 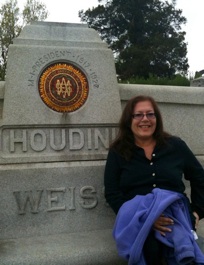 Psychic Medium Linda Lauren recently paid a visit to Houdini’s grave in Machpelah Cemetery in Queens and appears to have had a mysterious camera problem right before she took an equally mysterious fall.

“I felt people whispering all round me, close to my ears, and I felt a hand both push and pull me just before I took a nosedive into the monument steps.”


Did Linda encounter the wrathful hand of Houdini? Or maybe it was Mama!? Read the account of her visit and view the clip for yourself at her blog, Medium Rare.
Written by John Cox at 9:04 AM No comments:

Houdini in the classroom

Check out this inspirational Houdini study poster by Wilber Pierce. Unfortunately, it gets the quote a little wrong. Houdini’s actual words were: "My brain is the key that sets me free." Nevertheless, a nice item for the classroom. 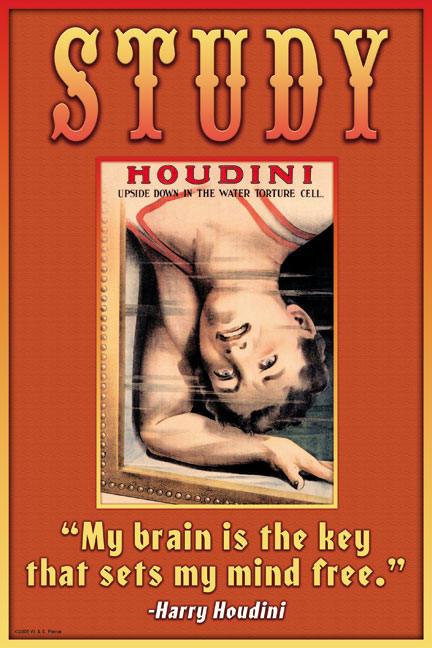 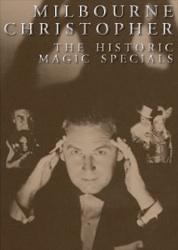 The Miracle Factory has released a 2-DVD set, Milbourne Christopher: The Historic Magic Specials, which contains three of Christopher's pioneering magic specials, including his 1969 Houdini tribute show, Houdini: The Impossible Possible, which includes footage of Houdini’s straitjacket escape and clips from Houdini's movies.

, and recreated one of Houdini’s performances in Houdini - Magic Vs. The Occult at Lincoln Center in 1976.

Milbourne Christopher: The Historic Magic Specials was created in collaboration with magic film historian William McIlhany. It retails for $60.
Written by John Cox at 12:46 PM No comments:

Houdini and the first Frankenstein

While reading the book, Edison’s Frankenstein by Frederick Wiebel, I stumbled on a few interesting connections between Houdini and the very first Frankenstein film.

Edison’s Frankenstein, which was considered a lost film until a print showed up in Wisconsin in the 1970s, opened March 18, 1910. It recently celebrated its centennial.

Does that date sound familiar? It should. March 18, 1910 is one of the most significant days in the life of Harry Houdini, as it is the day he made the first successful airplane flight in Australia. Houdini’s first flight also recently saw centennial celebrations this year.

But a more direct connection has to do with actor Augustus Phillips, who played the first Dr. Frankenstein on film. Phillips had a long career on stage and in early Edison silent film. In 1919 he came to Los Angeles and starred in his first west coast silent feature, The Grim Game.

The Grim Game was, of course, Houdini’s first west coast production as well. Phillips played Clifton Allison in the film. (The Phillips-Houdini connection is discussed in Edison’s Frankenstein, which actually features a Grim Game poster image on page 98.) 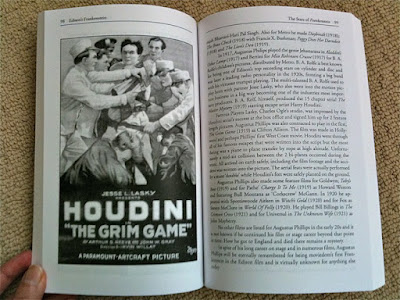 Another contract actor at Famous Players Lasky at the time was Charles Ogle. Ogle, who played the Monster in Edison’s Frankenstein, appeared in over 85 Laskey productions and was one of their top players in the ‘20s when Houdini was making his films. While Ogle did not appear in Houdini’s films (at least he’s not billed), it’s not unreasonable to believe that at some point Harry Houdini did indeed meet the very first Frankenstein.

For all things Frankenstein visit that fantastic blog, Frankensteinia, where not long ago I wrote a "guest blogger" article about my search for infamous Monster Meets Little Maria location: Return to Malibou Lake.
Written by John Cox at 8:55 PM No comments: 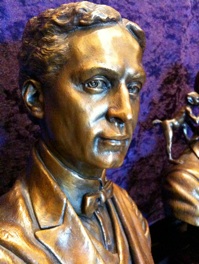 Monsterpalooza was the last place I thought I’d encounter any Houdini items, so imagine my surprise (and delight) when the first thing I saw when I walked through the door were five spectacular bronze busts of the great magicians including Houdini!

The Spectral Motion website shows just Keller and Thurston available for purchase at the moment, with Ching Ling Soo available for pre-order. It shows Houdini as “Coming Soon” and makes no mention of Robert-Houdin, so I guess what I saw today was pretty special!

Artist Carles Demiguel has posted on his blog beautiful textless examples of his cover art for the spanish editions of Daniel Stashower's Houdini mystery novels, The Dime Museum Murders

and The Adventures of the Ectoplasmic Man. Click on each to enlarge. 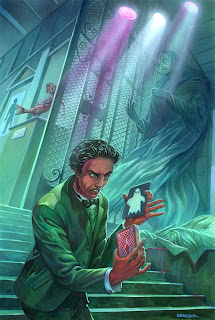 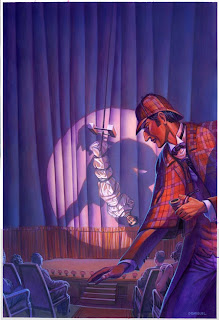 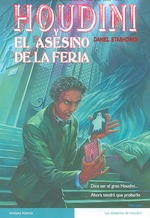 and Houdini Y Sherlock Holmes can be purchased on Amazon.com.
Written by John Cox at 2:49 PM No comments: 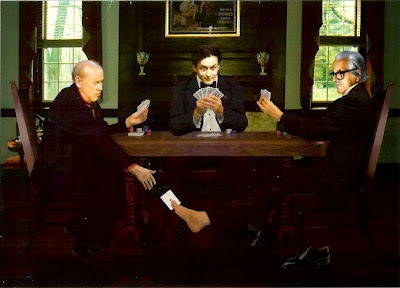 The image is said to be inspired by the 1890s Knaffl & Bro. photograph "The Skin Game" and the 1940s Irving Sinclaire painting "The Poker Game." It is released with permission from the Dai Vernon and Charlie Miller estates.

The greeting/invitation card is folded to 7”x5” and is blank on the inside leaving it open to be used for any occasion. It uses standard postage and includes a matching envelope.

Miller & Vernon Cheating Houdini can be purchased from Meir Yedid Magic. There is also a listing on Amazon.
Written by John Cox at 11:11 AM No comments: 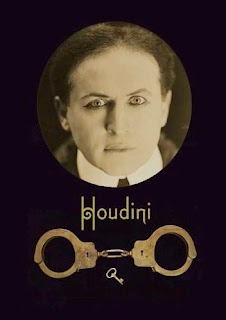 Today we have the confirmed tour schedule for Houdini: Art and Magic, the major new Houdini exhibition that opens at The Jewish Museum in New York on October 31, 2010 and will then tour the country.

The companion book to Houdini: Art and Magic (the cover of which you see here) can be pre-ordered now at Amazon.com.
Written by John Cox at 12:27 PM No comments: