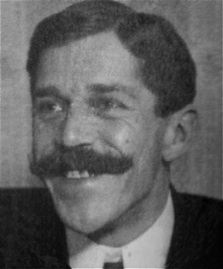 Franz Kukol was Houdini’s first chief assistant who served the great magician from 1903 to 1914 (and maybe longer).

Houdini hired the Austrian-born Kukol in Germany in March 1903. Kukol became an active and loyal part of the Houdini's team both onstage and off. He served as Houdini's personal photographer and even named his own son Harry Houdini Kukol (born May 24, 1909 in Austria). Kukol also played the substitution role in Houdini's Prison Cell & Barrel Mystery.

Franz Kukol's fate is somewhat mysterious. With the outbreak of World War I in 1914, it was reported that Kukol was drafted into the German Army. But it's also said Houdini fired him because of his nationality.

However, Houdini expert Patrick Culliton (who played Kukol in the 1976 TV movie, The Great Houdinis) believes Kukol continued on as Houdini's assistant for the remainder of his career under the name of Frank Williamson. There is some evidence to support this.

No information is available for when or where Franz Kukol died.