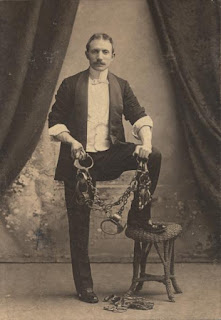 Jacob or "Jake" Hyman was Houdini's first performing partner and the man who is said to have come up with the name "Houdini." Jacob even performed himself as J.H. Houdini.

Jacob and Harry met while working together at H. Richter's Sons tie-cutting factory in New York City. Legend has it that one day Harry told Jacob that he had just read The Memories of Robert-Houdin, the autobiography of the great French conjurer. Jacob said that if Harry added an "i" to the last name of Houdin, it would mean "like-Houdin" in French. The name HOUDINI was born.

In 1891 Harry and Jacob quit their jobs and set out to pursue careers in magic as "The Brothers Houdini". But Jacob left the act to join the Army. On his return, he performed solo as "J.H. Houdini" and also did an act with his brother Joe called The Brothers Herne.

Jacob continued to perform as J.H. Houdini even after Harry became a success. He argued that he had as much right to use the name as his former partner. In 1903 Houdini decided they needed to hash out the issue of there being two Houdinis. With the help of his brother Leopold, an attorney named Louis Spiegel, and a pair of handcuffs from which Jacob couldn't escape, Harry reclaimed the name.

Jacob went to medical school at Ohio University (perhaps using the money Houdini paid for his act?) and became a successful physician in Los Angeles. In 1911 he married silent movie actress Dorothy Dale (Lyda Wilcox) and later became a minister. Despite the feud over the name, Jacob remained good friends with Harry and Bess. Hyman was an inner circle participant at the Final Houdini Seance in Hollywood in 1936.

Jacob Hyman's younger brother, Joe (who spelled his name Hayman), went on to become a popular comedian. His record Cohen on the Telephone was the first comedy record to sell a million copies.

Jacob Hyman died in 1942. His wife Lyda died in a house fire in 1957. They are both buried in Forest Lawn Memorial Park in Glendale, CA.