BBC News reports on the controversy over the Houdini Historical Society's "AKA Houdini" exhibition in Appleton, Wisconsin.

The AKA Houdini exhibit warns visitors that secrets are revealed Magicians have protested against a new exhibit in a Wisconsin museum giving away the secret to one of illusionist Harry Houdini's most famous tricks. 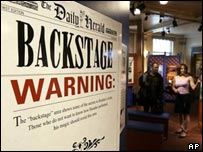 The exhibit at the Outagamie Museum in Appleton, Wisconsin shows how Houdini performed his "Metamorphosis" trick.

In the illusion Houdini - supposedly handcuffed in a sack and locked in a trunk - miraculously switched places with an assistant on the outside.

Some members of the Magic Circle have been angered by the museum's decision.

Illusionist David Copperfield has reportedly expressed his disapproval, along with lesser-known practitioners of the craft.

"This is a very, very passionate thing that magicians feel about," said Ronald "Rondini" Lindberg. "What the museum is doing is wrong."

"We didn't feel like we were exposing anything, because this information is readily available," she said.

"By telling people how this trick works, we're giving people a deeper meaning of Houdini."

Teller, one half of magical duo Penn and Teller, said people who see the Houdini exhibition would still be baffled if they watched a similar trick being performed at a show.

The AKA Houdini exhibit features 38 artefacts, 190 documents and "hands-on" displays that include handcuffs, lock picks, a straitjacket and a jail cell.

The part of the exhibit that shows how tricks are actually performed is in a backstage area.

The entrance bears a sign warning visitors not to enter if they do not want to know how Houdini achieved his baffling illusions.

Houdini was born Ehrich Weiss in 1874 in Budapest, Hungary. His family moved to Appleton when he was four and stayed four years.

Related:
Written by John Cox at 9:28 AM No comments: