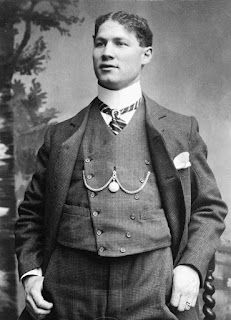 Houdini's younger brother Theodore or "Dash" (as Houdini called him) was born Ferenc Dezso Weisz in Budapest, Hungary on March 4, 1876. Like Houdini, he later naturalized himself as an American citizen, claiming to have been born in Appleton, WI. But Dash had a sense of humor about it and selected February 29 (leap day) as his new birthday.

Dash was one of Harry's first partners in an act they called The Brothers Houdini. While performing in Coney Island, it was Dash who first dated Beatrice Rahner. But it was Harry who married her. Theo later married Elsie Fozzard and fathered three children; Theodore Jr., Gladys, and Harry Houdini Hardeen.

Besieged by imitators, in 1900 Houdini brought Dash to Europe and set him up with an act that mirrored his own. If he was to be imitated, why not "keep it in the family," he told Dash. Houdini even chose his new name: HARDEEN. As Hardeen, "Monarch of Manacles", Theo carved out a respectable career as an escape artist. It was Hardeen who first performed the straitjacket escape in full view of the audience. He was also known for his escapes from "Tramp Chairs," something Houdini did not appear to do.

Sometimes the brothers presented themselves as rivals. They once even played in direct opposition to one other in Oakland, CA. But the truth was the brothers were very close and even lived together in Flatbush for several years. It was Hardeen who was with their mother, Cecelia Weiss, when she had her fatal stroke in 1913. 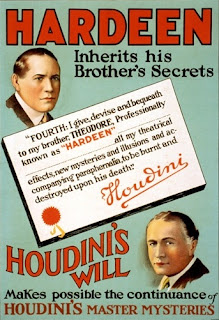 When Houdini was done with an effect, he would typically hand it off to Dash. Hardeen inherited Walking Through A Brick Wall and the Milk Can (once having a close call). In 1917, he retired from the stage and returned to New York to run Houdini's Film Developing Corporation. The troublesome business gave him ulcers.

After Houdini's death in 1926, Dash came out of retirement and toured as Houdini's official successor. He also served a term as President of the Society of American Magicians. From 1938 to 1941, Hardeen played on Broadway as part of Olsen and Johnson's popular revue show Hellzapoppin'. He also starred in a 1936 Vitaphone short called Medium Well Done (now lost).

In 1945 Hardeen named his assistant, Douglas Geoffrey, as his successor (he would perform as Hardeen, Jr.). On June 12, 1945 Hardeen died in Doctors Hospital after an operation for his ulcers.