The recent drama involving director Roman Polanski has revealed an interesting tidbit of news for Houdini fans. An article about the Polanski affair in the Seattle Weekly reports that Polanski biographer Christopher Sandford will next tackle Houdini.

“And back in Seattle, Sandford may be watching, even though his next book is on a completely different sort of celebrity: Imran Khan, the Pakistani cricket star-turned-politician. And his next biographical project? Harry Houdini, the great escape artist whom Polanski would no doubt like to emulate right now.”

Sandford has published acclaimed biographies of Kurt Cobain (now in development as a major feature film), Eric Clapton, Mick Jagger, David Bowie, Paul McCartney, Keith Richards, Bruce Springsteen, and Polanski. He has worked as a film and music writer and reviewer for over twenty years, and Rolling Stone has called him “the pre-eminent author in his field today.”

This will be one to watch for!
Written by John Cox at 4:11 PM No comments:

Paul Daniels and Bill Kalush talk Houdini on the BBC 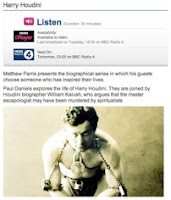 Houdini is the topic this week of the BBC Radio 4 series Great Lives. Presenter Matthew Parris explores the life of Houdini with British magician Paul Daniels and Houdini biographer William Kalush. It’s an excellent interview well worth a listen.

The Master Mystery print on demand 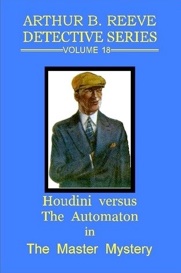 A new print on demand edition of The Master Mystery by Arthur B. Reeve is being sold on Lulu by Pulpville Press. This is the 1918 novelization of Houdini’s silent film serial of the same name.

Pulpville/Lulu is offering The Master Mystery as a hardcover ($27.93) and paperback ($14.91) as part of their “Arthur B. Reeve Detective Series” (I’m assuming that’s Reeve on the cover). The book includes illustrations from the “super serial.”

Thanks to Arthur Moses for the tip.
Written by John Cox at 9:46 PM No comments:

Randini: The Man Who Helped Houdini 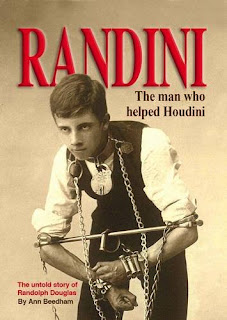 . This fully illustrated 236 page book reveals “the untold story of Randolph Douglas,” a Houdini fan living in the UK who created his own escapes and eventually become friends with Houdini himself.

The book features many period photos of “Randini” and a never before published photo of Randolph and Houdini in 1920. It also includes correspondence between the young escapist and the great magician, rare scrapbook clippings, and some fascinating sketches Randolph made of Houdini apparatus, including the Water Torture Cell.

I’ve only just received a copy so I haven’t read it yet, but this sure appears to be a fascinating look at a Houdini contemporary, and a wholly unique point of view on Houdini himself. This is easily a MUST for Houdini buffs.
Written by John Cox at 5:35 PM No comments: 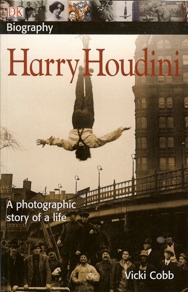 I’ve just discovered this copy of DK’s photographic biography of Houdini by Vicki Cobb with a different cover. All other copies I’ve seen feature a photo of Houdini in the Siberian transport wrist chain, but this cover shows him suspended over the NYC subway construction site having just freed himself from a straight jacket.

As this is a 6th edition (ISBN 9780756642563),  so it’s possible DK changed the art at some point after the 1st edition. But it is also possible DK has been offering this alternate cover art from the start (as I’ve seen them do with other titles). Could there be more?

I don’t have the answer, but I’m pleased to have nabbed this edition for the collection.
Written by John Cox at 10:02 PM No comments:

Bess costume among rare Houdini items on display in Austin

A collection of rare Houdini items, including a stage coat worn by Bess during the Houdinis European tour, are going on display for the first time at the historic Driskill Hotel in Austin, Texas. Reproductions of the items will also be offered for sale. Here is the full press release: 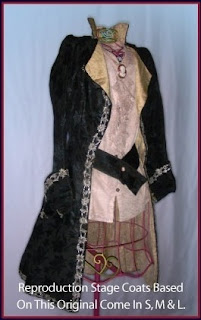 Austin magicians have discovered rare Houdini belongings given to a local man over 50 years ago by a lifelong friend of the famous escape artist. Kent Cummins, the founder and Executive Director of The Kent Cummins Magic Camp and a Special Consultant to the Society of American Magicians will present the items at the historic Driskill Hotel where Houdini always stayed while performing in Austin.

Austin oilman Jim Baldauf recalls, “It was in 1955 when I was a budding boy magician, and Houdini’s old friend, Jim Bard, was in his mid 80s. He would pull out his scrapbooks and share stories and rare memorabilia related to his and Houdini’s careers. They started out in show business together, touring with the Welsh Bros. Circus in 1896. After the gigs, they would go out and shoot pool.”

In addition to a collection of posters, letters and postcards, Bard passed on to Baldauf personal Houdini belongings such as a statuary bust of the magician, and a stage coat worn by Houdini’s wife, Bess. As spelled out in letters from Bard, Bess gave the coat to Mrs. Bard in the 1920s, and Houdini gave the bust to Jim Bard some years earlier. Only two other copies of the sculpture are known to have survived, one in David Copperfield’s collection, and the second in another major Houdini collection. The stage coat, designed and handmade by Bess for a European tour, is a one-of-a-kind rarity that exists nowhere else in the world. 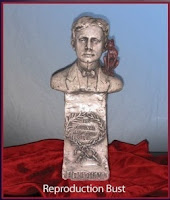 “I really didn’t know the value of what I had until I consulted with local magicians and studied a new biography which describes the lifelong friendship of Houdini and Bard,” Baldauf said. “Since then, several private collectors have expressed interest in the original items, but I decided to make reproductions available to the general public, and to let some of the revenues benefit two non-profit magic groups.”

Kent Cummins says the news conference will be the first public showing of the Houdini items; the sale of reproductions will kick off a fundraising campaign for the non-profit Austin Magic Camp. The Kent Cummins Magic Camp was founded in 1993 in Austin, and now helps nearly 1,000 children each year enjoy the fascination and fun of juggling, puppetry, and MAGIC!

The news conference will present the 100-year-old originals along with the Reproduction Offering. A group of Houdini experts and Texas magicians, including Baldauf, will be on hand to discuss the collection and to recreate some of Houdini’s stage magic. ‘Bess’ will appear in full-dress uniform to showcase the vintage stage coat. 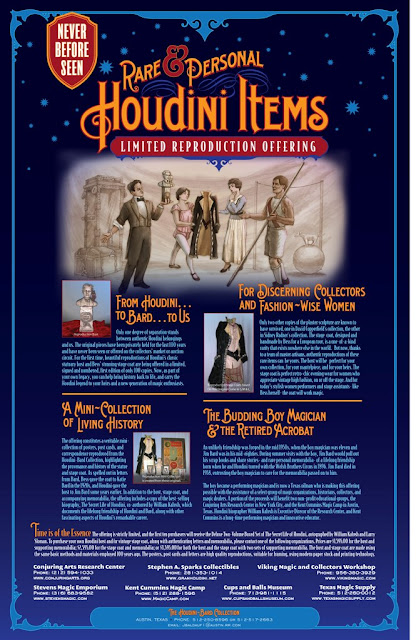