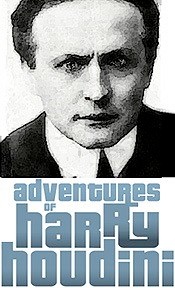 Serial Squadron, a company that produces original radio serials for release on DVD and MP3, have announced they are working on a new Houdini serial, The Adventures of Harry Houdini: Diet of Wyrms.

Sounds like good fun. We’ll keep you posted on the progress. For more on Serial Squadron visit their website.
Written by John Cox at 9:21 PM No comments: 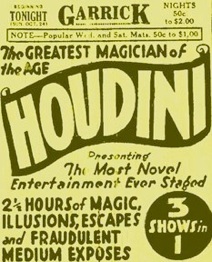 The excellent Carnegie Blog has uncovered a newspaper advert for Houdini’s very last performance on Sunday, October 24, 1926 at the Garrick Theater in Detroit, Michigan.

While reviews did note that Houdini didn’t quite seem himself that night, little did the audience know he was performing with a ruptured appendix and a 104 degree temperature (which rose to 106 by evenings end).

Houdini would die seven days later on Halloween 1926.
Written by John Cox at 10:09 AM No comments: 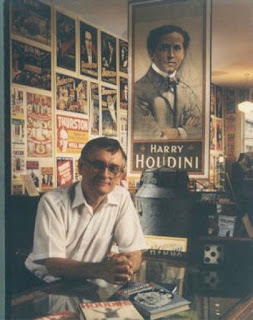 The Battle Creek Enquirer reports that the American Museum of Magic in Marshall, Michigan recently obtained a bequest of magic memorabilia from the Jay Marshall Estate which contains a number of items relating to Houdini, including pictures, notes, and an audio recording of the great 20th century magician's voice.

The bulk of the Marshall collection is paper ephemera including posters, handbills, photos, theater programs, correspondence, patents and notes related to 19th and 20th century magicians. It will be housed with the current collections in the museum's present home two buildings in the Historic District in Marshall, Michigan, a small town midway between Detroit and Chicago.

The American Museum of Magic and the affiliated Museum Library are built around the collection of Robert Lund, one of the world's foremost magic collectors and co-founder of the museum with his wife, Elaine. Lund passed away in 1995, and since his wife's passing in 2006 the museum has operated governed by a board of directors as a non-profit corporation. The museum is open Monday through Saturday from 10:00 AM to 4:00 PM, or by request (269-781-7570).
Written by John Cox at 6:01 PM No comments:

Houdini got a nice name check last night in the premier episode of Warehouse 13, a new series on SyFy (formally SciFi Channel) that is sort of X-Files meets the last shot of Raiders of the Lost Ark.

In the pilot episode Houdini’s wallet -- one of the many mysterious objects housed in a Top Secret government warehouse in North Dakota -- effects an escape and...well...it doesn’t do much of anything. But according to its Warehouse 13 index card, it is capable of “Charonic Transfer” (whatever that means).

Maybe the wallet will make a return appearance in a future episode? 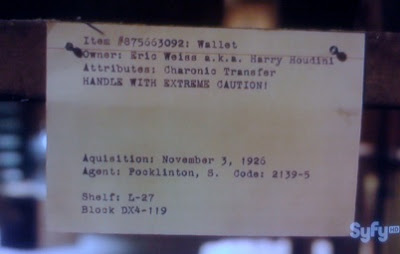 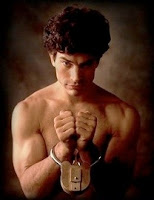 Actor Johnathon Schaech, who played Houdini in the 1998 TNT original film, Houdini, will be appearing at the Hollywood Collector’s Show on July 18 and 19. This will be Mr. Schaech’s first appearance at the show.