Houdini's restored Water Torture Cell sold for $300,000 at "The Great Houdini Auction" held at the Liberace Museum in Las Vegas on October 30. The auction sold off the vast majority of the Sidney Radner collection. The USD was the auction highlight with an estimate of $75,000-$200,000. Below is the auction page as it appeared on eBay.


The $300,000 bid was the highest price ever paid for a piece of magic apparatus. The buyer was David Copperfield. Copperfield also acquired Houdini's Milk Can for $35,000 and Houdini's iron gibbet for $65,000.

UPDATE: It appears irregularities with the bidding and an undisclosed reserve resulted in a settlement of the final sale price at $150,000.

The following article appeared in The New York York Times on October 29, 2004.

With Sadness, Houdini Artifact Collector Puts It on the Auction Block
By DEAN E. MURPHY 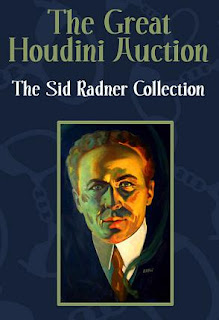 LAS VEGAS, Oct. 26 - In a windowless room behind the snack bar at the Liberace Museum, an elderly man with a thousand magic tricks up his sleeve could pocket $1 million or more this weekend. But the man, Sidney H. Radner, a retired rug salesman from Holyoke, Mass., is awfully downcast for someone of good fortune. His eyes, set deep behind wire-rimmed spectacles, invite sympathy, not envy.

Mr. Radner, aka Rendar the Magician, owns one of the world's biggest and most valuable collections of Harry Houdini artifacts, including the Chinese Water Torture Cell, one of Houdini's signature props from 1912 until his death in 1926.

Most of the items were given to Mr. Radner in the 1940's by Houdini's brother, another escape artist who went by the stage name Hardeen. Hardeen considered Mr. Radner, then a student at Yale with a reputation for jumping from diving boards in handcuffs, as his protégé.

Until early this year, the collection was on display at the Outagamie Museum in Appleton, Wis., where Houdini's father was the town rabbi in the 1870's. But after a rancorous falling out between Mr. Radner and museum officials, the 1,000-piece collection was packed up and shipped here, where it will be auctioned on Saturday in the windowless back room at the Liberace Museum and on eBay.

"Sid is very sad about it," said Jane Merrill of Capital Recovery Group, the auctioneers. "He really wanted it in a museum."

The sale, being promoted with true Houdini hyperbole, is the buzz of the magic world. Auction materials quote a 1942 letter from Hardeen, in which he described Mr. Radner as owning "the greatest collection of Houdini material of anyone in the world." Mr. Radner says it is worth perhaps $4 million. The auctioneers set the value at $2 million. When in Appleton, the collection was insured for $1 million.

David Copperfield has inquired about several pieces, Ms. Merrill said. Lance Burton stopped by the Liberace Museum this week to be filmed by the History Channel escaping from one of the Houdini straightjackets. A 94-year-old woman from New Jersey, Dorothy Young, who Mr. Radner said was the last living person to have performed with Houdini, is scheduled to arrive here this weekend.

"Houdini is still the most recognized name in magic," Mr. Burton said. "It is very exciting to have all of his stuff here."

Beneath the excitement, though, are anger, resentment and disbelief that the artifacts, kept together for nearly eight decades by Hardeen and then Mr. Radner, will be dispersed, perhaps never to be in one place again.

Sometime past midnight on the morning after the auction, Mr. Radner will convene a séance, as he does every year on Halloween, to mark the day that Houdini died. This time he will do so with an unusually heavy and conflicted heart, he said.

"If there is any hope of ever bringing him back, this would be enough to agitate him," Mr. Radner said. "Maybe he will have something to say. Maybe he will say, 'Don't do it!"'

Mr. Radner blames the Outagamie Museum, and in particular its executive director, Terry Bergen, for the turn of events. Though saddened to see the collection broken up, Ms. Bergen said the outcome reflected the "very little common ground" that exists between "the entertainment world and the museum world."

Relations between Mr. Radner and Ms. Bergen turned sour last year when the museum decided it could not afford to renew the contract for the collection. For 15 years, Mr. Radner had lent the pieces for an annual fee, which by the last year of the contract, 2003, had reached about $27,000, Ms. Bergen said. (Mr. Radner said it was closer to $22,000.)

"Houdini lived here four years and his story is interesting, but there is a whole lot of other stuff that has gone on in Appleton," Ms. Bergen said in a telephone interview. "Our county funding had been cut by 35 percent. It was just ruinous for us. We had to cut a lot of things."

Mr. Radner said he was interested in working out a deal, and had even included a provision in his will that would have given the collection to the museum after he and other members of his immediate family had died. But if there was ever hope of a compromise, it was crushed when the museum opened a new interactive exhibit on Houdini in June.

The exhibit, intended for children, reveals how Houdini pulled off one of his most storied illusions, known as Metamorphosis, in which he was placed inside a trunk that was locked by his assistant. Houdini managed to get out of the trunk and switch places with the assistant.

Ms. Bergen said the exhibit was a huge success, both in drawing visitors to the museum and in creating interest in Houdini and his magic. But the exhibit infuriated Mr. Radner and many other magicians, who protested that the museum had broken the magician's code by revealing the secret.

Ms. Bergen, who explained to Mr. Radner that the trick was widely available on the Internet and in libraries, said she nonetheless was bombarded with complaints from "a small but angry" group of magicians who branded her the "Houdini betrayer."

"The stink over the Metamorphosis was part of the stink over us not renewing the lease," Ms. Bergen said. "It would not have happened if we hadn't made Sid mad and other people mad."

Geno Munari, a friend of Mr. Radner who owns a chain of Houdini magic shops, including several here in Las Vegas, said the Appleton museum had taken advantage of Mr. Radner's generosity. By Mr. Radner's reckoning, he had donated $750,000 worth of artifacts to the museum over the 15 years. Now, Mr. Munari said, the museum figures it can get along without him and his collection.

The ultimate act of selfishness -- and disrespect -- was exposing the illusion, Mr. Munari said.

The ill feelings have persisted. Ms. Bergen recently had a lawyer remind Mr. Radner that he could not use museum stationery to promote his collection. Though Mr. Radner was a founder of the Houdini Historical Center, a division of the Outagamie County Historical Society, which operates the museum, Ms. Bergen said it was inappropriate for the letterhead of a nonprofit group to be used for commercial purposes.

Mr. Radner said this week that he would not rest until he had removed the Houdini Historical Center from the control of the Outagamie County Historical Society and had relocated it far from the grip of Ms. Bergen.

"I don't care where it goes, so long as it is not in Appleton," he said. "She doesn't know Houdini from Liberace. She just knows dollars."

The curator of the Houdini exhibit in Appleton, Kimberly Louagie, said if Houdini's wishes had been honored, there would be none of the bickering over the collection. As Ms. Louagie tells it, Mr. Radner and his friends might not like what they hear should Houdini reveal himself at the séance on Halloween.

"According to his will, he wanted it destroyed," she said. "I would suspect that he doesn't like the fact it is out there at all."


UPDATE: Houdini's Water Torture Cell sells at auction.
Written by John Cox at 11:13 AM No comments: