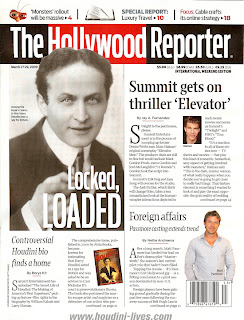 The sale of Kalush and Sloman's The Secret Life of Houdini

to Summit Entertainment has grabbed headlines across the web and print media. Nowhere was the story given flashier coverage than in Friday’s print edition of The Hollywood Reporter (right) which scooped the news in a great front page spread. Houdini would be loving this!

"Fragment of an unknown Houdini poster"

Here’s an intriguing item currently up for auction as part of Potter & Potter’s Magic Collection of Jay Marshall, Part III to be held on April 26. 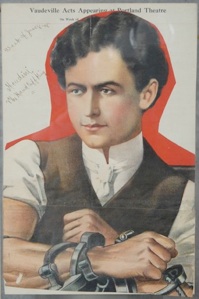 Lot 178. Houdini, Harry. Color lithographed poster fragment on page from ledger of Portland Theater, Maine, July 8, 1908, signed and inscribed. Lithograph fragment of a young Houdini in handcuffs signed and dated on the top of the ledger sheet, with part of the signature tied to the poster. The inscription reads "Houdini, The Handcuff King." Although this item reposed in Jay Marshall's collection for years and carries the inscription "fragment of unknown Houdini poster with signature" in the intervening years, one copy of the complete poster has been discovered. Estimate $600 - $1,200


UPDATE: Below is the complete poster. 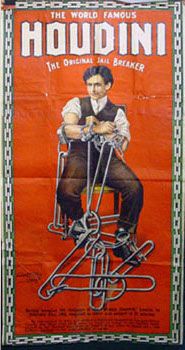 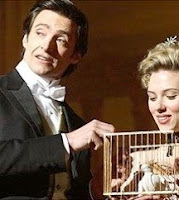 Even though he hasn’t been officially announced in the role, actor Hugh Jackman is reported to be in New York rehearsing the forthcoming Broadway musical, Harry Houdini. (This appears to be a new title. Until now, it was referred to as Houdini: An Original Musical.)

A source said: "Hugh is taking his role very seriously! He's even studying how to perform Houdini's magic acts. Hugh has been receiving tips and help from great magicians such as Criss Angel and Ricky Jay."

Jackman will have to recreate the same tricks live on stage eight times a week once the production opens in New York in spring 2010.

Scott Sanders and David Rockwell will produce Harry Houdini, which features a book by best-selling author Kurt Andersen and music by Danny Elfman. Tony Award winner Jack O'Brien is attached to direct.
Written by John Cox at 12:31 PM No comments:

Summit set to turn Houdini into an action hero 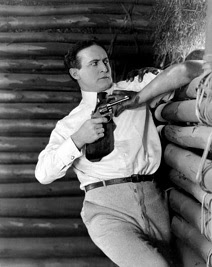 , picking up feature film rights to the biography by William Kalush and Larry Sloman.

The comprehensive tome, published in 2006 by Atria Books, has become known for insinuating that Harry Houdini acted as a spy for Britain and was asked to be an adviser to Czar Nicholas II's court in prerevolutionary Russia. The book also portrays the master escape artist and magician as a debunker of con artists who pretended to be spiritualists, leading to the controversial theory that Houdini's death was caused by the spiritualist movement as payback.

The studio, which is looking for writers to adapt the book, does not aim to make a biopic but rather an action thriller featuring a character who is part Indiana Jones and part Sherlock Holmes. Summit hopes to cash in on worldwide recognition of Houdini's name while potentially launching a franchise.

Houdini has long entranced Hollywood, with projects having been set up at studios including Columbia, Universal and Walden and such boldface names as Robert Zemeckis, Paul Verhoeven, Ang Lee and Tom Cruise keen on exploring various aspects of his character, from the lovelorn magician to the adventurer.

Despite the interest, few projects have made it to the screen. Among the best known is Houdini

, a 1953 biopic starring Tony Curtis and Janet Leigh. The most recent was Death Defying Acts

(Editing by Sheri Linden at Reuters)
Written by John Cox at 7:18 AM No comments:

LINK: Harry Houdini and Pittsburgh, the ties that bind

Check out this terrific article by Clay Morgan in the Pittsburgh Post Gazette about Houdini’s exploits in that city. Click the headline to to read. 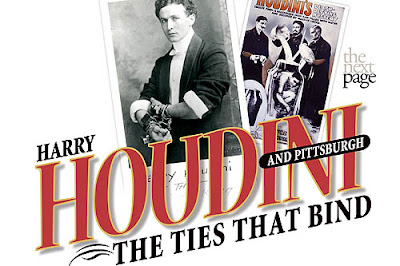 UPDATE: This article claims that Houdini made a second leap from the Seventh Street bridge on March 13, 1908. The author appears to have gotten this from The Secret Life of Houdini, but I've yet to find any evidence of this escape. Also, Houdini was still performing in Detroit on this day. He didn't open in Pittsburgh until March 16. So I suspect the below photo is of his earlier May 22, 1907 jump. 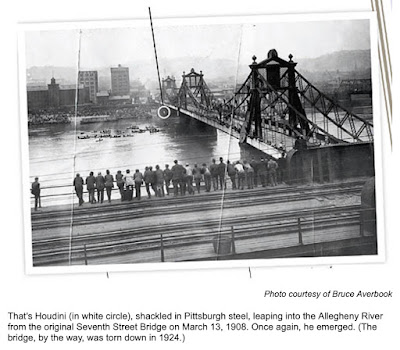 For more on Houdini's Pittsburgh plunges, check out Joe Notaro's Did Houdini ever perform an overboard box escape in Pittsburgh? at HHCE.
Written by John Cox at 10:08 PM No comments: 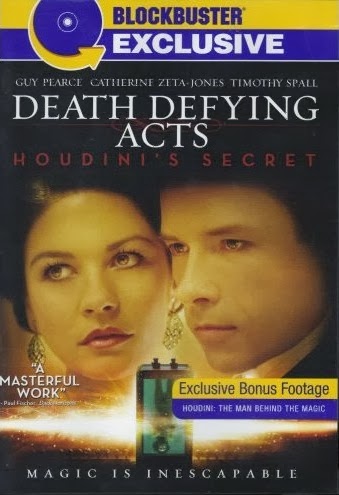 Blockbuster is offering an “Exclusive” Death Defying Acts DVD that contains “Bonus Footage”. The footage referred to is a short documentary entitled, Houdini: The Man Behind The Magic, featuring the stars and filmmakers discussing the real Houdini.

Death Defying Acts stars Guy Pearce as Houdini and Catherine Zeta-Jones as a Scottish psychic.
Written by John Cox at 4:29 PM No comments:

This photo, recently offered for auction on eBay, shows a convalescing Bessie Houdini in January 1929 during the time of the infamous Arthur Ford seances.

Now, I love Bessie. I wish there was a book written just about her. And while I realize this isn’t the most flattering picture, it does capture an intriguing moment in time.

First off, we see her head is wrapped due to her “nasty fall.” In the 1976 TV movie The Great Houdinis, we see Bessie fall down the stairs at 278 after being startled by mysterious happenings on Halloween night. A less romantic version claims that the fall took place while she was out drinking with Arthur Ford.

We also see Bessie’s right wrist is wrapped. The Secret Life of Houdini claims Bessie tried to kill herself on the night of January 4, 1929, but it doesn’t specify how. Pills seems likely, but could the wrist wrap offer another possibility?

Finally, and this is what I really like about this photo, and why I’m posting it here, this is the only photo I can recall that gives us a very nice look at her famous wedding band which contains the message from Houdini; "Rosabelle, sweet Rosabelle."
Written by John Cox at 9:26 AM 2 comments: 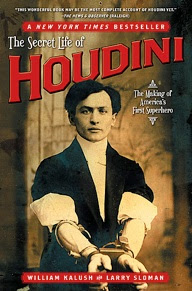 When The Secret Life of Houdini: The Making of America’s First Superhero by William Kalush and Larry Sloman was first released in 2006, I gave it a positive review. With its oodles of rare pictures and some intriguing new information, I still consider it a worthy addition to my Houdini library.

While there IS some good groundbreaking research here to be sure (I’m thinking of the fascinating new Margery material), it is maddeningly mixed with Houdini generated fictions, and the authors decision to write the book in a narrative style continually blurs the lines. In fact, the very first notation in Laid Bare admits that the Santa Ana buried alive stunt -- as told in great riveting detail in the first chapter of the book -- is considered by some to be “apocryphal.” So they opened the book with a story sourced only to Houdini that they couldn’t corroborate? As responsible biographers, shouldn’t they have tried to find the truth behind the stunt or, failing that, left it out entirely (as Silverman did)? What is the point of a new biography if not to present a truer picture of the man?