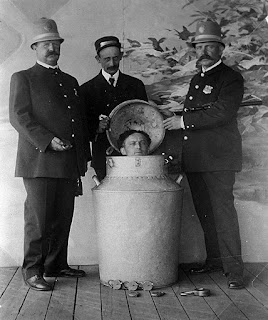 Houdini's first great onstage water escape was The Milk Can. Houdini would be locked inside an oversized galvanized milk can filled with water. He would then escape while conceded inside a curtain cabinet. As part of the effect, Houdini invited members of the audience to hold their breath along with him while he was inside the can.

Houdini first performed the Milk Can escape at the Columbia Theatre in St. Louis on January 25, 1908. It was advertised with dramatic posters that proclaimed "Failure Means A Drowning Death." The escape proved to be a sensation.

The Milk Can marked an evolution of Houdini as a performer. With the Milk Can, Houdini brought his death-defying feats, which had been confined to his outdoor bridge jumps, into the theater itself. In some cities, Houdini accepted challenges to escape from the can after it had been filled with beer by a local brewery. It was during one of these challenges that he had his only mishap when he passed out because of the fumes. 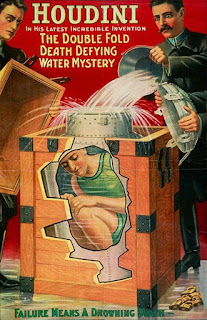 So popular was Houdini's Milk Can that it became wildly imitated by other escape artists. So on June 1, 1911, Houdini introduced a new version of the escape in which the locked water-filled can would also be locked inside a heavy wooden chest. Houdini called it his "Double Fold Death Defying Water Mystery."

Houdini replaced the Milk Can with his famous Water Torture Cell in 1912. But he still occasionally performed it in theaters that could not accommodate the more complex Torture Cell. Houdini's brother Hardeen, who was also an escape artist, performed the Milk Can and the Double Fold Mystery into the 1940s.

Today several Houdini and Hardeen Milk Cans survive in museums and private collections. The Double Fold chest sold in auction in 2014 and now resides in the David Copperfield Collection.


CLICK FOR ALL POSTS RELATED TO THE MILK CAN

CLICK FOR ALL POSTS RELATED TO THE DOUBLE-FOLD MYSTERY