In 1924 Houdini toured the United States exposing the methods of fraudulent spirit mediums. His first tour ran February and March along the eastern seaboard. His second tour was nationwide and ran from October through December. His lectures consisted of a slide show, demonstrations of seance techniques, exposures of specific mediums such as Margery, and an open Q&A session. In his earliest lectures he also did a selection of magic and escapes. Most engagements were single night stands and saw Houdini appearing in cities he had never played before, and at venues as divergent as Carnegie Music Hall and a Ku Klux Klan Auditorium. The name of his lecture was "Can the Dead Speak to the Living?" 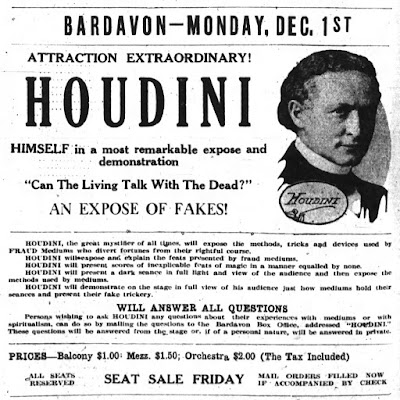 CLICK TO VIEW ALL POSTS RELATED TO HOUDINI'S SPIRITUALISM LECTURE