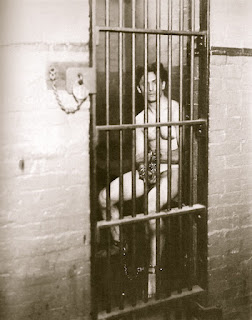 One of Houdini's most perplexing feats was his amazing ability to escape from any jail cell. In his early days, he billed himself as The World Champion Jail Breaker.

In each city Houdini would play, he would arrange to be "tested" by the local jailer. Houdini would allow himself to be stripped and searched by doctors to ensure he had no concealed lock picks or keys. He would then be manacled and locked securely in a cell. Within minutes, he would reappear free. In some instances, it would be discovered that he had unlocked all the doors in the cell block and switched all the prisoners around.

When Houdini escaped the Boston Tombs in 1906, he not only switched around prisoners, but he escaped unseen from the prison itself, speeding away in a waiting car. He then called the warden from the theater as he was about to go on stage.

Houdini never failed in one of his jail breaks.


CLICK FOR ALL POSTS RELATED TO HOUDINI'S JAIL BREAKS