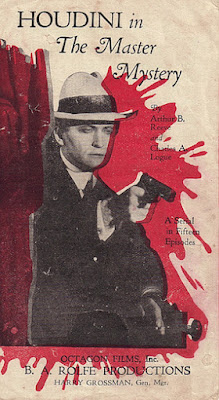 Houdini was involved in cinema almost from the start of the medium and his own career. Starting in 1906, he filmed many of his outdoor escapes and showed them at the start of his vaudeville act. Seeing Houdini usually meant also seeing a movie.

Houdini's first exhibited film appears to have been a short called Houdini Defeats Hackenschmidt. The film played in England in 1905 and Boston in 1906, but is now lost. His earliest surviving narrative film is Les merveilleux exploits de Houdini à Paris made in 1909 for Film Lux. The movie showcased several escapes as well as his handcuffed leap from the roof of the Paris morgue into the Seine.

As movies grew in popularity and began to supplant vaudeville, Houdini decided to enter the business in a more substantial way. In 1918 he starred in a 15-part serial for Octagon Films called The Master Mystery. The serial did good business and led to Houdini making two feature films in Hollywood for Famous Players-Lasky/Paramount, The Grim Game and Terror Island. 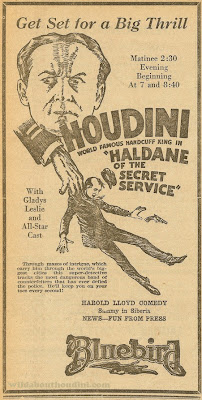 In 1920 Houdini formed his own motion picture company, The Houdini Picture Corporation. He made two films, The Man from Beyond and Haldane of the Secret Service, for which he was the producer, writer and star. He also ran his own film laboratory business called the Film Developing Corporation (FDC), and a specialty distribution arm, Mystery Pictures Corporation, which acquired foreign films for U.S. release. One of these films, The Soul of Bronze, is sometime mistakenly listed among movies starring Houdini.

While Houdini's early films did respectable business, his later films did not. The FDC also proved to be a costly failure. Houdini folded his motion picture businesses in the mid 1920s. But he would make one more film appearance doing card magic in a Marvels of Motion short for Max Fleischer. This was later released on its own as Velvet Fingers in 1926 (the year Houdini died).

Today most of Houdini's movies are available on DVD and streaming. In 2015, Houdini best lost film, The Grim Game, was restored by TCM. While it aired on television that year, it has yet to appear on any home format.