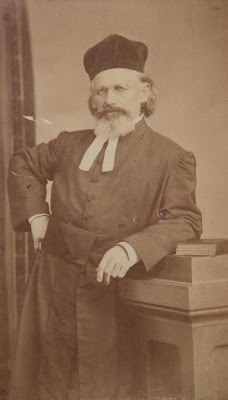 Houdini's father, Mayer Samuel Weisz (later Weiss), was born August 27, 1829. In 1851 he received his Certificate of Ordination by the Rabbinical Examination Committee for the Wespnimer Comitat in Buda, Hungary.

In 1863 is first wife died, leaving him with one infant son, Armin (Herman). That same year he met and married Cecelia Steiner, who was 13 years his junior. The couple lived at Rakos arok-Gasse No. 1 in the Buda section of Budapest, Hungary. Their first child died.

After the births of his sons Natan Josef (1870), Gottfried Vilmos (1872), Erik/Houdini (1874), and Ferencz Deszo (1876), Rabbi Weiss left his family in Hungary and traveled to London and then onto America. Legend has it that he killed a man in a duel and that is why he had to flee the country. In 1878 he secured a job as the Rabbi in Appleton, Wisconsin, and sent for his family to join him there.

In Appleton, Mayer Samuel and Cecelia had two more children; Leopold David (1879) and Carrie Gladys (1882). On June 6, 1882, Mayer Samuel and his family became U.S. citizens. But in August of that same year, Rabbi Weiss lost his job and the family moved to Milwaukee where they fell into poverty.

In 1887 the Weiss family relocated to New York City. While respected, the aging Rabbi Weiss (who never learned English) could not find steady work, and for a time worked beside his son Ehrich at R. Richter and Sons tie factory.

On October 5, 1892, Mayer Samuel died at age 63 after an operation for tongue cancer at Presbyterian Hospital in New York City. He is buried in Machpelah Cemetery in Queens.