Houdini's grand finale: 3 Shows In One

Today, April 6, is Houdini's "adopted" birthday. So I thought this was a good day to look back at his last great career metamorphosis.

It might come as a surprise to learn that if you saw Houdini at the peek of his career, you would not be seeing him in his own theatrical show as magicians perform today. Back in his time, seeing Houdini meant seeing him as part of a Vaudeville program -- a show that would include a dozen or more Variety acts. Houdini's time on stage was only ever about 20-30 minutes long.

While contemporaries like Thurston and Blackstone toured with their own full evening shows, Houdini remained in Vaudeville. But Vaudeville was the mass entertainment of it's time, and not only was Houdini at one point the highest paid performer in American Vaudeville, but he dominated the circuits and the cities in which he played. It could be said that part of Houdini's all-eclipsing fame had to do with the fact that he appeared on more stages and in more cities more often than any other major magician of that time.

But Vaudeville as the most popular form of mass entertainment began to decline with the rise of movies in the late teens and '20s (the major Vaudeville houses eventually became movie theaters), and in 1925 Houdini decided to make the transition to a full evening show of his own.

Houdini threw himself into the effort, teaming with renowned theatrical manager, L. Lawrence Weber. Advanced publicity touted the partnership: "'L. Lawrence Weber Presents' is the highest endorsement any attraction can possibly have and Mr. Weber's presentation of Houdini promises to be the most novel and gorgeous entertainment of its kind ever seen." Houdini commissioned a musical score and hired new assistants (8 total). Bess made the costumes. The show's apparatus filled 50 crates and was hauled in a 60 foot railway car. 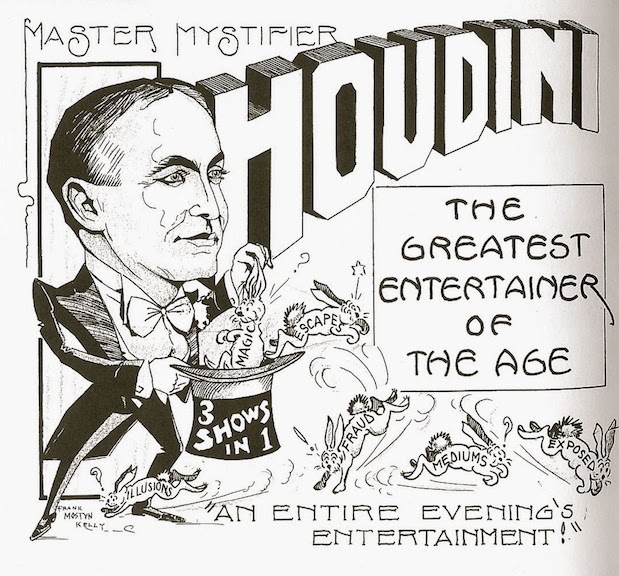 "Some of the magicians thought I was going to use a lot of women in my forthcoming show and they are trying to beat me to it. They have been misinformed. I am going to specialize in Houdini stuff."

- Houdini on his full evening show


The show opened for a 3-night run at the Maryland Theater in Cumberland on August 31, 1925 (a full review of this performance was reproduced in Genii, October 1962). In December it arrived in New York and played on Broadway, first at the Shubert Theater on 44th St. and then the National on 41st. Street.

Houdini billed the evening as "3 Shows In One." In many ways it was the culmination and a celebration of his entire career. The two and a half hour show (with two 10 minute intermissions) opened with Houdini arriving on stage to Pomp and Circumstance. The curtain was a gigantic tapestry made up of ribbons and awards that Houdini had been presented during his career.

The first of the "3 Shows" (Acts) was Magic. To prove there was nothing up his sleeves, Houdini would "tear" off the arm sleeves of his tuxedo and perform with bare arms. This section also included illusions that "startled and pleasured your parents and grandparents." Here Houdini did some effects by Dr. Lynn, the first magician young Ehrich Weiss ever saw. He also revived Metamorphosis with Bess (billed a Miss Beatrice Rahner in the program). Ken Silverman observed in Houdini!!! The Career of Ehrich Weiss that, "It would not exaggerate the novelty of Houdini's 1925-26 show to say that, after a lifetime in magic, it marked his professional debut as a magician."

With his magic act, Houdini was now directly competing with his friend Howard Thurston and other Golden Age magicians who offered full evening shows. This led to conflict when Thurston accused Houdini of poaching one of his assistants. But the two superstars kept in regular communication and did not let things get out of hand. When Houdini created a new effect in which he produced a number of alarm clocks (The Flight of Time), he wrote to Thurston explaining the effect "to prevent any confliction" in their programs.

The second act was Escapes. This was, essentially, his Vaudeville turn, and it was classic Houdini. Here he did the Needles and the Water Torture Cell, or another famous escape, such as the straitjacket or a packing crate challange (he later introduced a Buried Alive stage effect). Act 3, which by many contemporary reports was the strongest part of the show, was devoted to exposing the methods used by fraudulent spirit mediums.

It must have pleased Houdini to read a review in the Dayton Herald which said: "Last season Thurston presented a remarkable entertainment. But Houdini captivated this reviewer in a much greater measure than his predecessor in magic." Max Holden wrote in The Sphinx: "The Houdini show is one of the most interesting I have ever witnessed. The spiritualistic part being worth many times the price of admission."

While no-one could fault Houdini's escapes and spiritualist exposures (Orson Welles recalled Act 3 as being "riveting, like a perverse sort of revival meeting"), his magic did come under fire by some magicians. In Hiding The Elephant, Jim Steinmeyer quotes Chicago magician Vic Torsberg as saying: "Houdini's magic was just a bunch of junk. You know, that push-button German crap. That's what he performed."

Houdini's roadshow proved profitable. The show cost $2000 per week to mount and routinely grossed $8000-$10,000 per week in ticket sales (top priced ticket was $1.50). In Chicago, his first week grossed $12,500. Nevertheless, L. Lawrence Weber left the show in December 1925, and Houdini took over management himself.

Walter Gibson said Houdini intended to tour his full evening show for 10 seasons. But Houdini only completed one full season (36 weeks). His second season opened at the Majestic Theater in Boston in September 1926 with two new effects; Buried Alive and Slicing A Women in Seven. But Houdini was struck down on Halloween of that year. An irony is that the advertising for the 3 Shows in One featured Halloween imagery.

Below is an amazing photo of Houdini on the stage of his 3 Shows In One. He is standing center stage doing card flourishes with Jim Collins who is holding Robert-Houdin's Crystal Casket. Behind him you can see the Water Torture Cell and Jim Vickery. To the left is the prop for "Radio of 1950", from which would appear Dorothy Young. To the right is the cabinet used for "Welcome Summer" and the silks from the "Whirlwind of Colors."

It must have been a heck of a show!

Thanks to John C. Hinson for the photo of Houdini on stage. "3 Shows In One" advert from Houdini A Pictorial Life by Milbourne Christopher.

Email ThisBlogThis!Share to TwitterShare to FacebookShare to Pinterest
Tags: [History], 1925, 1926, 3 Shows in One