The Master Mystery screening in L.A., May 3

Attention all LA-based Houdini buffs. The Silent Movie Theater in West Hollywood will screen episodes from The Mastery Mystery as part of their special "Serial Queens of the Silent Screen" program this Thursday, May 3, at 8:00. 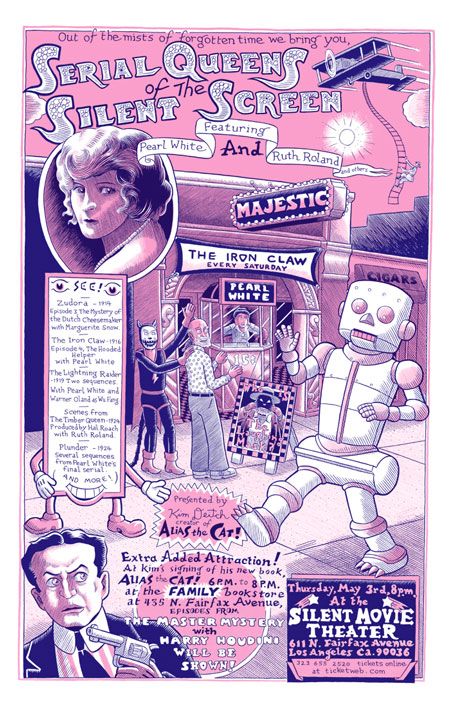 UPDATE: It’s a little unclear from the advert above whether The Master Mystery will screen at the Silent Movie Theater itself or at a book signing at Family Bookstore before the event. I sent an email requesting clarification, but have not yet received a reply.
Written by John Cox at 1:35 PM No comments:

A restoration that’s a revelation 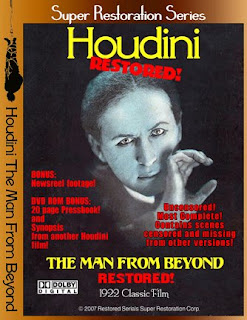 finally released a DVD of Houdini’s 1922 film, The Man From Beyond. However, I’m here to tell you the Alpha release this is by no means a definitive version of this film. Not by a long shot.

, which offers the best quality and the most complete print of this movie ever presented.

I’ll let Bruce -- an expert in silent cinema and a film professional with over 30 years visual effects and restoration experience -- explain how he tackled his first Houdini film:

“Alpha Video's version is basically off the British release which is missing the original Main Titles, several other titles and a few scenes. The American Release of the film (which is what is being sold by my eBay competitors) is in worse shape than the Alpha Video release and had several scenes censored that were in the British Release. They include: the sexual innuendo during the chess scene, the shots of the hypodermic needle and the ghost scenes. These scenes may have been censored when the film was re-issued.

The source material was so poor that most companies won't even touch it. Early on the project, I brought it to one of the top restoration companies in Hollywood. They put parts of it thru a $250,000 piece of equipment. I thought the project was beyond what I have in my home office. Well, the results were terrible! So bad, in fact they gave me money back! That's when I invested in additional software to tackle the project here.

I used very high end software that seeked out almost every piece of dirt. Then I spent months doing hand repairs and stabilization. The restoration was 6 months very grueling work. There are some shots I redid many many times. But the final results are worth it!

The film literally comes alive with the restoration and music. I used a special Music program called Sonic Fire that literally composes music to film. And I based the composition on the music notes in the pressbook. People have told me it is like watching a different movie. Houdini is riveting with a proper presentation!”


Having just watched this DVD alongside the Alpha version, I concur! Highest praise goes to the new music and the stabilization. This really does make it a new experience. And it’s GREAT to finally see the original main title cards.

My one and only quibble is the recreation of some title cards. While this does make some unreadable cards readable and the font matches exactly, I’m a purist in this sense and want to see the original titles as photographed, regardless of quality. I miss those big looping question marks.

As a bonus, Bruce has included the full The Man From Beyond pressbook as 300dpi PDF, and a rare program flyer for The Master Mystery. Also, this DVD includes complete and uncut footage of Houdini escaping from a straight jacket in Dayton, Ohio. [See UPDATE] I’ve see bits of this footage, but never the whole escape, start to finish, filmed in long shot. What’s cool is at one point we can see a cameraman set up on the ledge and shoot the closeup footage that we see most often in documentaries.

The escape is followed by dynamite footage of a very happy Houdini taking bows to the cameras as Jim Collins tries to hustle him away (pic below). This bonus footage alone makes this DVD a must! 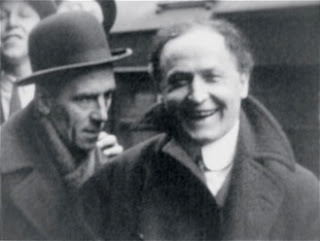 The Man From Beyond Restored can be purchased on Amazon.com

.
UPDATE: I've discovered the bonus straitjacket escape footage is not Dayton. It's actually the Hearst Bldg in Chicago, Illinois, February 24 1922.
Written by John Cox at 10:02 AM No comments:

Email ThisBlogThis!Share to TwitterShare to FacebookShare to Pinterest
Tags: Chicago, DVD, Movies, Preservation, Reviews, Straitjacket (suspended), The Man From Beyond (1922) 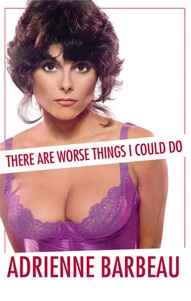 Adrienne Barbeau’s bestselling autobiography, There Are Worse Things I Could Do, is now available in paperback from Amazon.com.

Of course, Houdini buffs know Ms. Barbeau from her turn as Daisy White in the 1976 ABC TV movie The Great Houdinis (my favorite of all the Houdini biopics).

It’s been long suggested that Houdini and Daisy White -- who worked as both a box jumper and behind the counter at Martinkas Magic shop in New York -- had an affair. In The Great Houdinis it’s more than suggested. In parlance of the ‘70s, they get it on!

Visit Adrienne Barbeau’s official website for news on book signings and appearances.
Written by John Cox at 1:41 PM No comments: 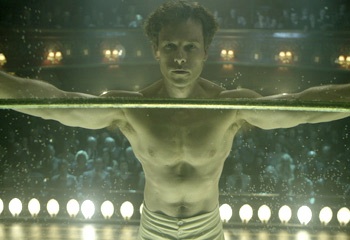 Finally we have a first photo of Guy Pearce as Houdini in the new film, Death Defying Acts, co-starring Catherine Zeta-Jones. Shouldn’t he be upside-down?

Death Defying Acts is a “supernatural romantic thriller” which tells the fictional story of Houdini’s relationship with a Scottish psychic played by Zeta Jones.

Death Defying Acts will be released by The Weinstein Co. sometime in 2007.
Written by John Cox at 5:51 PM No comments:

An original copy of Magic Made Easy has fetched a whopping $4,457 on eBay. The auction started at $9.95 (no reserve) and received 29 bids. 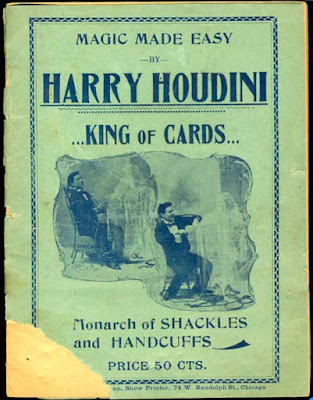 Published in 1898 out of financial desperation, in this catalog “Prof. Harry Houdini” offered for sale many of the effects that only a year later would bring him intentional fame and fortune, including Metamorphosis, the East Indian Needle trick, and his full Handcuff Act!

What I find fascinating is Houdini features a spirit photograph of himself on the cover, showing that the magician was very interested in the techniques of Spiritualists very early in his career (it did not blossom with the death of his mother, as is depicted in most biopics and documentaries).

Congrats to the winner of this beauty.
Written by John Cox at 9:55 AM No comments:

The cover art for the UK paperback edition of The Secret Life of Houdini by William Kalush and Larry Sloman has undergone a slight change. Also notice the subtitle is different on the UK edition. Instead of The Making of America's First Superhero (as seen on the U.S. edition), it now reads The Making of the First Superhero.

UPDATE: It appears there has been another change in that the title's tag is now "The Making of the World's Greatest Mystifier", which I think is a much better title. 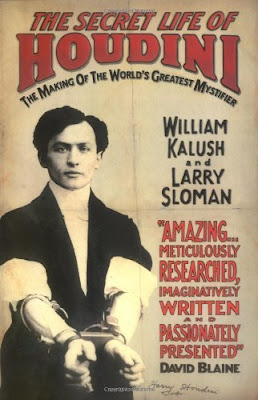 Jay Marshall collection on the block May 5 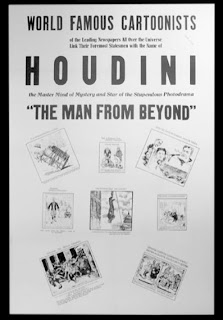 On May 5th, 2007, selections from the Jay Marshall magic collection will be sold at auction. Included are many significant lots of Houdiniana, including an original Kings of Cards poster and an unusual one sheet for The Man From Beyond (right).

The auction will be conducted at the Hyatt Regency Woodfield Hotel in Schaumburg, Illinois. The auction will be open to the public, but held in conjunction with the 38th Annual Magic Collectors' Weekend (click here for more information on the MCA Weekend). Previews will be held at the hotel on May 3rd and 4th.

Click here to purchase or download a PDF of the auction catalogue.
Written by John Cox at 6:59 PM No comments: