By Nicole Sperling
The Hollywood Reporter

Walden Media and director Mark Waters are getting into the magic game. The Phil Anschutz-owned production company has attached Waters to develop an adventure film about a 14-year-old who discovers that he is a descendant of the great illusionist Harry Houdini.

Jessica Tuchinsky, Waters' producing partner at Watermark Pictures, will produce along with her husband, Jason Hoffs (The Terminal

An original idea developed at Walden Media, the project centers on a young boy, who upon hearing the news of his lineage, embarks on a journey to unravel the secrets of Houdini's past, uncovering a legacy the famed magician was trying to protect.

"Houdini has exerted a fascination on people for the last hundred years," said Hoffs, who will be producing with his wife for the first time. "The movie takes place in the present, but our lead character and the audience will learn some of the secrets of what Houdini was really up to."

The production is looking for a screenwriter.

) is shooting The Spiderwick Chronicles for Paramount Pictures and Warner Bros. Pictures in Montreal. He is attached to direct two projects for Walt Disney Pictures, Bob the Musical and the recently announced Me2 from screenwriter Larry Doyle (HR 10/19).

Tuchinsky and Waters' Watermark Pictures is based at Paramount. Hoffs has a first-look producing deal at DreamWorks.

Waters is represented by CAA. 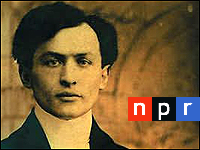 NPR (National Public Radio) has a terrific audio interview with William Kalush, co-author of the new book, The Secret Life of Houdini: The Making of America’s First Superhero

Kalush talks about Harry’s possible spying career, how he believed Houdini escaped from the Siberian Transport Cell, and his discovery of unknown information about Margery the Medium and her possible involvement in Houdini’s death.


CLICK HERE TO LISTEN TO THE INTERVIEW
Written by John Cox at 1:09 PM No comments:

Italy, Germany get HOUDINI on DVD For whatever reason, Paramount Home Entertainment has yet to release a DVD of the 1953 Tony Curtis classic HOUDINI in any country that speaks English. For years fans have had to track down an asian import edition on eBay.

Now we have a “Paramount Collection” edition coming out...in Germany and Italy.

Oh well, gaze above at the German cover art and dream of what could be.

Thanks to John Dziadecki.
Written by John Cox at 9:24 AM No comments: 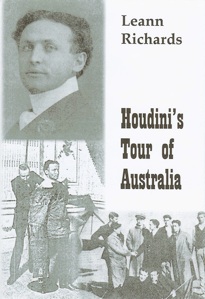 I love specialized Houdini studies, and this new book, Houdini’s Tour of Australia by Leann Richards, certainly fits that bill.

This well-researched 60 page paperback chronicles Houdini’s highly eventful tour of Australia in 1910. It was during this tour that Houdini became the first man ever to fly a plane in Australia; a feat which he believed he would be remembered long after his magic career had been forgotten.

Houdini’s Tour of Australia can be purchased now at Ginninderra Press
Written by John Cox at 1:47 PM No comments: