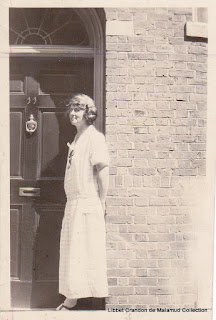 The famous medium known as "Margery" was born Mina Marguerite Stinson in 1888. She grew up on a farm in Princeton, Ontario, Canada, and moved to Boston as a young woman where she met and married a grocer, Earl Rand. They had one son. She later met Dr. Le Roi Goddard Crandon when she entered the hospital for an operation (possibly appendicitis). In January of 1918 she became Dr. Crandon's 3rd wife and moved with her son to his home at 10 Lime Street.

Mina began experimenting with séances as a hobby, possibly to distract her husband from a morbid obsession with mortality. She claimed that she could channel her dead brother, Walter Stinson, and gave seances for friends and associates of her husband, sometimes allowing herself to be stripped nude and examined.

Mina became well-known as her alleged skills were touted by Sir Arthur Conan Doyle and others. In 1924 her name was submitted as a candidate for a prize offered by Scientific American magazine to any medium who could demonstrate genuine ability under strict test conditions. Among the investigation committee was Houdini.

The "Margery" sittings (the committee gave her the name to protect her identity), were held first at 10 Lime Street, and then later at the Charlesgate Hotel in Boston. The seances were contentious and controversial. Houdini suspected fraud from the start and jumped the gun in publicly exposing Margery as a fraud. Eventually the committee denied her the prize.

But Margery continued to have her supporters and she continued to give seances until her death on November 1, 1941 at the age of 53.