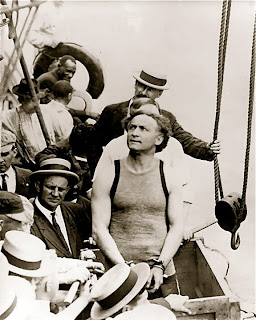 The Overboard Box was Houdini's signature outdoor escape from 1912 to 1916. In this feat, Houdini would be shacked and nailed into a heavy packing crate. The crate would be wound in ropes and weighed down with steel weights. It would then be sent down a plank or lowered via block and tackle into the water. In a few minutes, Houdini would come to the surface free. The box would be retrieved and found to still be sealed.

Houdini's first overboard box escape was on July 7, 1912 off Governors Island in New York. In 1914 he repeated the stunt off New York's Battery before a crowd numbering 15,000. Houdini performed the escape several times (see below a list of known escapes), and also did it on-stage in the water tanks of Hammerstein's Victoria Theater and the New York Hippodrome. The overboard box also appears in two of his movies, The Master Mystery (1918) and Terror Island (1920).

After Houdini's death, his brother Hardeen made the overboard box his own signature outdoor escape, performing it several times from Atlantic City's Million Dollar Pier.


CLICK FOR ALL POSTS RELATED TO THE OVERBOARD BOX