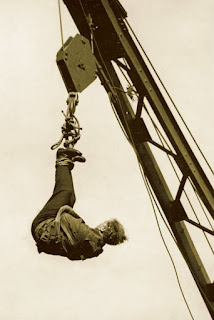 The suspended straitjacket escape is one of Houdini's most iconic feats. Houdini would have himself strapped into a regulation straitjacket and suspended from a high building, typically one housing a newspaper office to ensure press coverage. Houdini would then free himself in full view of the assembled crowd that sometimes numbered in the tens of thousands.

Houdini performed his first suspended straitjacket escape in Kansas City on September 8, 1915. His last may have been in Indianapolis on April 2, 1925. Houdini performed suspended straitjacket escapes in most of the major cities he played, including New York, San Fransisco, Los Angeles, Washington D.C. and Houston. Many of these escapes were filmed.

In 2011 one of the straitjackets Houdini used during his suspended escapes sold at a Christies auction in London for $46,980.


CLICK FOR ALL POSTS RELATED TO SUSPENDED STRAITJACKET ESCAPES