Nathanson will unlock The Secret Life of Houdini 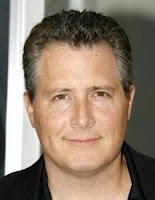 IGN.com is reporting that screenwriter Jeff Nathanson has signed on to write and direct The Secret Life of Houdini for Summit Entertainment.

Summit hopes to launch a fictional action franchise in the vein of Indiana Jones and Sherlock Holmes featuring Houdini’s supposed adventures as a spy for the British government.

, and has worked with Steven Spielberg on numerous projects. He also has the dubious distinction of writing Speed 2: Cruise Control.
Written by John Cox at 9:30 AM No comments:

Death Defying Acts released on DVD in the UK 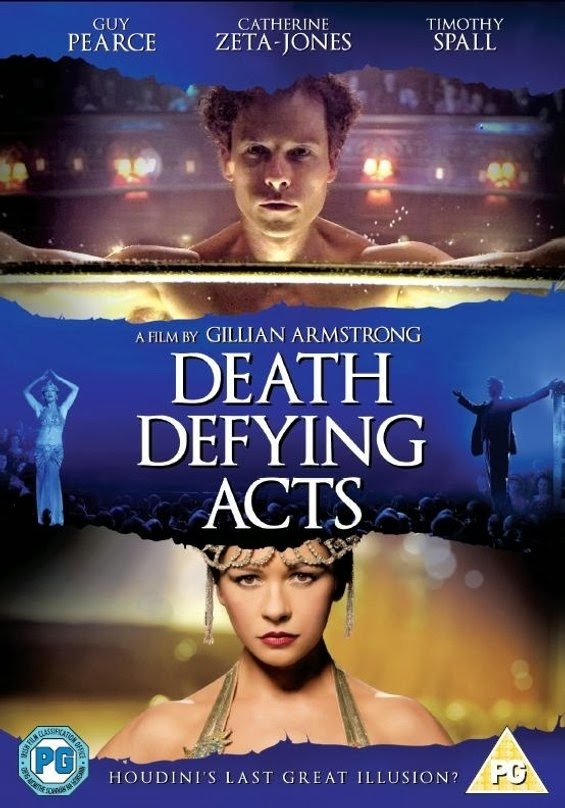 Death Defying Acts can be purchased now at Amazon.co.uk.

Two one-of-a-kind Houdini props from the storied collection of Arthur Moses have been put up for sale on eBay. 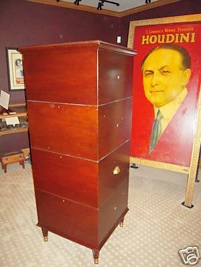 First is Houdini's Original Spirit Cabinet Illusion. According to listing, this escape effect was built in 1924 and intended it to replace his famous Water Torture Cell. Houdini would be encased within four wooden boxes. Iron rods were then placed down the length of the four corners, locking the boxes in place. He may have also been restrained in ropes or chains strung though the holes on either side of the cabinet. The cabinet would then be concealed behind a small drape, from where Houdini would quickly emerge free - yet the cabinet, when shown and inspected, was still tightly secured. The New York Hippodrome program referred to it as "an almost perfect mystery." Opening bid: $18,000. 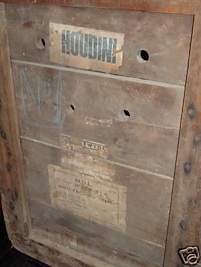 Next is an Original Houdini packing crate from his home in New York City. The crate contains old shipping labels stating that the trunk belongs to Bess and Harry Houdini. Each end of the crate contains Houdini's theatrical labels in large black letters proclaiming HOUDINI. The crate has Houdini handwriting on one side. In pencil, he wrote "ALL STRAIT JACKETS, OCT 1920." Milbourne Christopher's biography on Houdini clearly states that this was during the time that Houdini formed his movie company and placed his props in the basement to concentrate on making motion pictures. Starting bid: $30,000.
Written by John Cox at 9:22 AM No comments: Conservative gas-bag Rush Limbaugh has helped himself to Houdini’s classic King of Cards poster to help illustrate his latest attack on President Obama.

Says Limbaugh, "Is Obama the new Houdini? You know, it's Barack H. Obama. Does the "H" now stand for Houdini? Is he trying to escape all responsibility, that he has no responsibility for his own votes for TARP?”

Whatever.
Written by John Cox at 10:09 AM No comments: