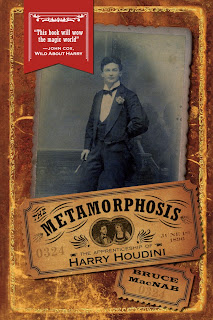 In The Metamorphosis: The Apprenticeship of Harry Houdini, author Bruce MacNab has combined his passions for Houdini and Maritimes history to create a book that is not only a terrific day by day account of Houdini's 1896 Canadian tour, but also a vivid snapshot of everyday life at the turn of the century. It really is one of the most remarkable books ever written about Houdini, as well as being a marvelous chronicle of what it was like to be a traveling magic troop in the 1890s.

Because this period of Houdini's life has never really been put under the microscope, this book contains a wealth of previously unknown details about the great escape artist. We learn that Houdini used a trained chicken, "Banjo" (named by his mother), early in his career; discover the details of Houdini's lost Trilby levitation; meet his very first assistant, John Kenny; and learn the exact nature of Houdini's challenge rope escape in which he guaranteed to escape in less time than it took to tie him (and his failure to do so one night in Nova Scotia).

Bruce has also uncovered the location of Houdini's ill-fated horse back escape; speculates on what could be a connection between J. Gordon Whitehead and another Canadian named Whitehead who traveled with the magic troop; and has unearthed a terrific story about Baldwin - The White Mahatma, visiting the Marco troop and helping to perform a "stolen watch" trick during a hotel dinner. There is also a wealth of new details about Houdini's short-lived American Gaiety Girls burlesque show, and the Marco Magic Company's chief rival, Markos (whose assistant later married Houdini's early performing partner, Joe Hayman).

But maybe the most historically important aspect of this book is how Houdini's employer, Edward James Dooley (aka "Marco"), is fleshed out as he has never been in any book before. The perception has long been that Dooley was a bit of con man who abandoned Harry in Bess in Canada. But this is not true at all. Dooley was a sincere performer and lover of magic who's greatest flaw appears to have been his bad luck (which I can't help but think continues in 2012 with a book that immortalizes his most disastrous tour). But Houdini had great affection for Dooley, and McNab has discovered that their friendship continued long after the ill-fated tour and into the years of Houdini's great success. This is as much a book about a failed magician as it is about the early career of a superstar. 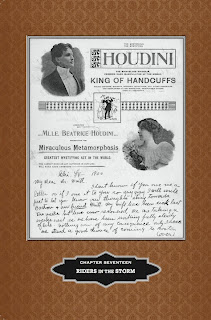 What also makes The Metamorphosis a real joy is how MacNab has fleshed out each chapter with wonderful details about the Canadian towns and cities that Houdini and the Marco Co. played. One really gets a strong sense of time, place, and local color. Even without Houdini (and Harry is sometimes absent for full chapters) this book remains fascinating as it vividly captures the pulse of life in the 1890s.

And I haven't even mentioned the generous amount of never-before-seen photographs and documents, including a mind-blowing series of four sequential shots of Harry and Bess performing Metamorphosis (with this trunk) in 1901.

While The Metamorphosis is truly wonderful reading, I realize getting a copy has been anything but a wonderful experience for eager readers. I've recently heard that Amazon has become very stingy with stocking books by smaller publishers. I'm not sure if this has anything to do with this book's sketchy availability on the site, but know that the book can be purchased direct from Goose Lane Editions or from Barnes & Noble.com where it is currently available. It can also be found at The Book Depository, which offers free shipping worldwide.
The Metamorphosis: The Apprenticeship of Harry Houdini by Bruce MacNab is meticulously researched, beautifully written, and essential reading for anyone interested the deeper story of Harry Houdini.
Written by John Cox at 7:20 AM