- Joe Posnanski, The Life and Afterlife of Harry Houdini 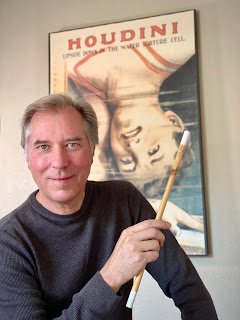 Hello, my name is John Cox and I'm wild about Harry!
My fascination with Houdini began in late 1975 when I was hit with the double whammy of seeing the 1953 Paramount biopic, HOUDINI, and watching the late great Doug Henning perform Houdini’s Water Torture Cell live on NBC. Who was this amazing Houdini fellow who could escape from anything? The next day I went to the local mall and bought my first two Houdini books; the perennial Houdini on Magic by Walter B. Gibson and William Lindsey Gresham’s biography, Houdini The Man Who Walked Through Walls. I was hooked. Forty plus years later, I am still on a never-ending quest to find out more about the "Master Mystifier", with a collection of over 500 books and more than 2000 individual items.

As a teen, I dabbled in escape and performance magic and wrote articles about Houdini for my school newspapers. I billed myself as a "Houdini Enthusiast" and I would haunt bookstores for Houdini rarities. Inspired by Houdini skills as a self-publicist, I was able to attract newspaper coverage of my escapes and growing Houdini collection. I even appeared on The Toni Tennille Show where I did a straitjacket escape. 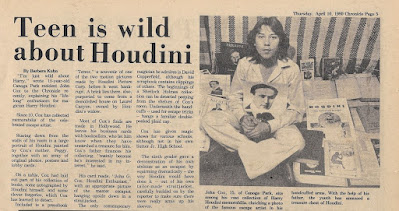 Along the way I was mentored by Houdini experts like Manny Weltman and Patrick Culliton. I was also fortunate to strike up a relationship with Houdini’s niece, Marie Blood. I became a member of The Magic Castle in Hollywood on my 21st birthday...held in the Houdini Seance Room, of course!
After graduating from the USC School of Cinema-Televison in 1990 (where I made a Houdini documentary as one of my projects), I became a professional screenwriter, penning projects for Warner Bros., MGM, 20th Century Fox, DreamWorks, ABC, USA, and the WB networks. (You can read more about my screenwriting career here.) Today I work primarily in Digital Cinema and devote my creative energy to Houdini. 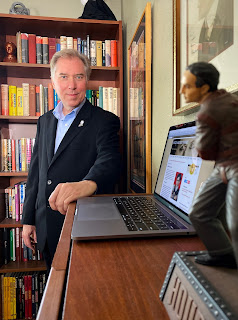 I give illustrated lectures on Houdini's life and career. I write articles about Houdini in magic magazines. I also consult on various Houdini projects for film, radio and television. I've appeared in several television documentaries, including two episodes of Houdini's Last Secrets with George Hardeen, The UnXplained with William Shatner, Strange Inheritance with Jamie Colby, and the 2021 BBC documentary, Houdini's Lost Diaries. I also had the pleasure of appearing as a prime character in Joe Posnanski's bestselling The Life and Afterlife of Harry Houdini. I'm currently working on a definitive chronology of Houdini's life that I plan to publish as part of an "Ultimate" Houdini book in 2024.
In 2006 I launched my first Houdini website, Houdini Lives! I expanded that site into WILD ABOUT HARRY in 2010. Here I keep up with all current Houdini news, auctions, book/DVD releases and cultural references. I also delve deeply into Houdini history, and in some cases have rewritten that history.

Yes, I'm wild about Harry! And so are you.

"John Cox is the loving and diligent caretaker of my grandfather's and great uncle's astounding legacy. Thanks forever, John. You're a true brother to me!" - George Hardeen

"If you're wild about Houdini, you'll like this very well-done Houdini fan site." - Teller

"Your WILD ABOUT HARRY site continues to amaze us all. I have no idea how you do it!" - John Gaughan

"If anyone is interested in learning anything about Houdini, it’s a wealth of information that you won’t find in a book. I learned an enormous amount from John." - Kristen Connolly

"Thank you for your continuing dedication to Houdini. Your blog is far and away the best Houdini resource in the world today." - Bruce MacNab

"John is performing a service for us all by going the extra mile, past those first few Google result pages, to find the really obscure, undiscovered stuff." - The Mandala

"You're the Internet's Eclipsing Sensation!" - Todd Karr, The Miracle Factory

"You are a star." - David Copperfield