When Houdini escaped the belly of the beast 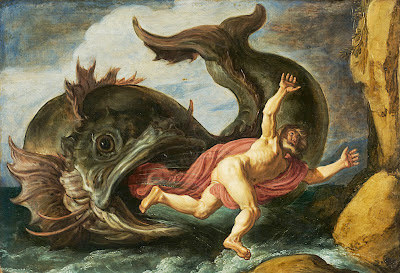 In the late 1990s Columbia Pictures planned to make a big-budget Houdini movie starring Tom Cruise. The film was to be directed by Paul Verhoeven (later Ang Lee) from a screenplay by Stephen Rivele and Christoper Wilkinson. Had that movie ever been made, it would have started like this:

Cape Cod, Halloween 1924: We are at a masked ball at a Cape Cod mansion. A young couple steals away from the party and walks down to the beach, holding hands. At the breakwater's edge, they kiss -- oblivious to the fact that something large and bulbous is racing towards them, its dorsal fin slicing through the surf...

Suddenly, a large wave heaves the creature onto the beach. It spills out onto the sand beside the startled couple where it lays unmoving in the moonlight. The frightened woman asks, "What is it?" As they step closer, the creature suddenly rolls over, its jaws opening with a death rattle. The woman's scream brings us...

Hippodrome Theater, Boston: The beached creature -- a narwhale -- is now center stage, flanked by men with axes. Its belly is convulsing, as if it's about to give birth. The audience watches, mesmerized, as the beast suddenly breaks open with a sucking ripping sound and THE GREAT HOUDINI emerges from within, covered in viscera and holding chains. "Liberated, commanding, radiating primal power. Like a figure from mythology. Like a god."


Not a bad way to start a Houdini movie. What makes it even better is this is all based on fact. Houdini did indeed escape from the belly of a beached sea creature at Boston's B.F. Keith's Theater on September 26, 1911. It remains one of Houdini's most famous and bizarre challenges.

The "freak sea monster" was news in New England even before Houdini became involved. The carcass had either washed up on shore or was caught by local fisherman, depending on the newspaper account. The press claimed it weighed 1500 pounds and was "estimated to be about 500 years old." Papers struggled to describe it. One called it a "turtle-tortoise-fish or whatever it is." Soon the press simply dubbed it the "What is it?"

What exactly the "What is it?' was is still a mystery today. Houdini called it a "mongrel breed of whale and octopus." Ken Silverman in Houdini!!! The Career of Ehrich Weiss suggests that it could have been an elephant seal. For the purposes of their screenplay, Rivele and Wilkienson decided it was a narwhale. But Patrick Culliton in Houdini The Key says it was actually a giant leatherback turtle. From the existing photo, it does appear to resemble a turtle more than a whale or octopus. 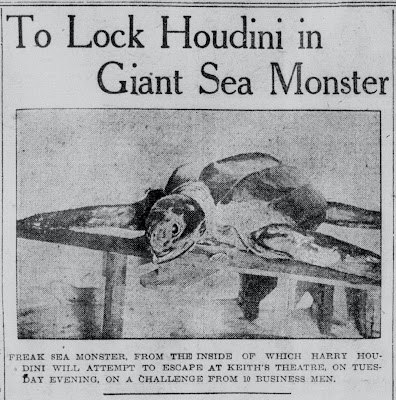 Houdini was playing the B.F. Keith's Theater in Boston when the "What is it?" was discovered, and soon it was announced that ten prominent Boston businessmen (one of them a taxidermist) had devised a challenge in which Houdini would be shackled in "extra strong handcuffs and leg-irons from police headquarters" and sewn up inside the belly of the beast. References to Houdini as Jonah were not discouraged.

The drama of the challenge was teased out for days. Newspapers reported that "[Houdini] concedes that it will be the most difficult test he has ever attempted." One paper noted that "Houdini has received a telegram from his family in New York telling him not to enter the monster." Houdini's only condition was that he be provided ventilation inside the creature. In turn, he signed a waiver releasing the ten challangers of any responsibility.

On the day of the challenge, "several thousand people" lined the streets of Boston to watch as the "What is it?" was carried through the streets. The journey took it from Long Wharf to the Keith's stage entrance on Mason street. Originally the challenge was to have taken place during the evening performance, but was changed to the matinee because "of certain conditions which have presented themselves." (Perhaps the carcass was not going to keep until evening in a warm theater?)

Massachusetts Lieutenant-Governor Louis Frothingham was watching from the wings as Houdini took the stage at Keith's where the sea monster and his ten challengers awaited. The auditorium was said to be "choked to the doors." It's not recorded what Houdini was wearing, but one would think a bathing suit would have been his uniform for this challenge. Houdini was shackled hand and foot and then climbed with "much difficulty" into the creature, sprinkling perfume where his head would lay. The carcass was then laced up tightly with chains run through steel eyelets three inches apart. It was then wrapped entirely with chains and concealed inside a curtain cabinet.

After 15 minutes, Houdini stepped forward, "greasy but grinning." The sea monster was then revealed to be still laced and chained exactly has it had been. Houdini is reported to have asked for a window to be opened so he could take some fresh air. What the audience didn't know was that Houdini had almost been suffocated by fumes from the arsenic used to embalm the carcass. What Houdini and press had exploited as a dangerous escape turned out to be just as dangerous as they promised.

That evening the Lieutenant Governor invited the Houdinis to his home. The next day the papers delighted in pointing out that Houdini had bested Jonah himself -- "[Houdini] took only 15 minutes to gain freedom while it took the old sailor of the Bible three days to get free."

Years later Houdini claimed in an article for Colliers that he had actually escaped from the sea monster underwater. In this version, said to have taken place before the Keith's test, Houdini said that in his struggle to get free he overturned the creature and the full weight of the carcass pinned him. Quick thinking on the part of his assistants, who started raising the carcass, took the weight off, allowing Houdini to escape. It's a great story. But like Houdini's under the ice adventure, it's doubtful it really happened.

In 2010 Patrick Culliton published in Houdini The Key the method he believed Houdini used to escape from the Sea Monster at Keith's that day. It's ingenious (even obvious), but I don't reveal Houdini's secrets here.

However, I am happy to reveal Hollywood's secrets. So here are the opening two pages from the never-made Houdini movie by Rivele and Wilkinson. A little overwrought and overwritten in my opinion, but I suspect Houdini (and Mr. Cruise) would be fine with that.

Here are some other articles online about Houdini and his Sea Monster: