The true story of the Laurel Canyon Houdini Estate 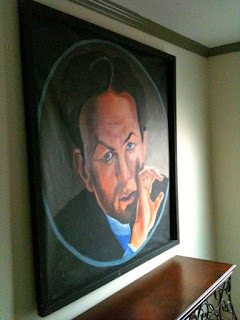 Last month Patrick Culliton and I had the great pleasure of touring the "Houdini Estate" in Laurel Canyon, CA with the current owner, José Luis Nazar.

There is a lot of confusion over this property and whether or not Houdini ever actually lived here. Some say it was Houdini's house. Some say "he never set foot" on the property. Some identify a larger house up the street as the real "Houdini mansion." So I thought I'd use this blog to clear up the mystery and history of the Houdini house...as much as I can.

The truth is the property at 2400 Laurel Canyon Blvd was never owned by Houdini. It was owned by Ralf M. Walker, who in 1915 built a Mediterranean style villa at what was then 2398 Laurel Canyon Blvd (the address became 2400 later). The house was three stories with 11 bedrooms, nine baths, a ballroom, a 15-foot stage for musicians and a ballet room big enough for 10 dancers. He also built a four bedroom guest house across the street at 2435 Laurel Canyon Blvd, and this is where Houdini comes in.

Walker and Houdini were friends -- Houdini might have even invested in Walker's Laurel Canyon Land Co. -- and when the magician came to California in 1919 to film his two features for Famous Players-Lasky, The Grim Game and Terror Island, he and Bess are said to have stayed at Walker's guesthouse at 2435 Laurel Canyon Blvd. That house is now long gone, but here the great Patrick Culliton, author of Houdini The Key and life-long Laurel Canyon resident, shows us exactly where the real Houdini house once stood.


Now, it needs to be said that we don't (yet) have smoking gun evidence that puts Houdini and Bess in the Walker guesthouse in 1919 (update). But we do have circumstantial evidence. In Harold Kellock's Houdini His Life Story (page 271), it says that Houdini spent "his leisurely evenings at home in the modest bungalow he had rented in Hollywood" and that "fellow players returning from late parties, who might have been moved to investigate the solitary light burning in the Houdini bungalow, would have seen the Handcuff king and escape artist scratching busily with his pen at a table littered with manuscripts and old volumes."

The house at 2435 did indeed sit on a bluff above Laurel Canyon Blvd where, yes, one would have been able to see a solitary light burning in the window while driving to and from parties in the Hollywood Hills. The property was also practical -- being relatively close to the Lasky studio (which sat at Sunset and Vine), and scenes from The Grim Game were shot in Laurel Canyon. There is also no other address for Houdini at this time.

We also have Bessie's return to 2435 Laurel Canyon Blvd following Houdini's death, which suggests a familiarity with this Hollywood "home" and with Mr. Walker. And unlike the brief 1919 stay, we have ample evidence of Bess and Edward Saint's occupancy at this time.

This is probably when the legend of the "Houdini mansion" took root. When Bess would throw parties or hold seances, etc., she would do so at the Walker mansion across the street. In fact, the guesthouse had an elevator that went down to a tunnel that ran below Laurel Canyon and came up in the big house grounds (the tunnel is sealed but still exists). One can understand how local magicians who attended these events came to assume that the house belonged to Bess and, by extension, Houdini. The "Houdini mansion."

Bess and Edward Saint left 2435 Laurel Canyon when Walker either died or sold the estate in 1935 to a real estate broker named Charles Wilson. The property went through a series of renters, including evangelist Joe Jeffers, who turned the mansion into the Temple of Yahweh and required donations of up to $100,000 to live on the property. Following Jeffers came an eccentric poetess, Lee Alden, who was known as "The Green Virgin." After Charles Wilson's death in 1954, Fania Pearson bought the property with the intention of turning it into a girls school.

But then in 1959 the Walker mansion and the guesthouse at 2435, which was then owned by a man named Al Sulprizio, both fell victim to the great Laurel Canyon fire. Newspapers at the time reported that "the old Houdini mansion" was among the homes destroyed. The clip below is a news report on that famous fire. While there are no photos of the Houdini guesthouse, Patrick thinks it's possible the house can be glimpsed at 0:30. It appears to fit the description of a house that sits on a bluff above the road. [UPDATE: This is actually part of the original Walker mansion on fire.] 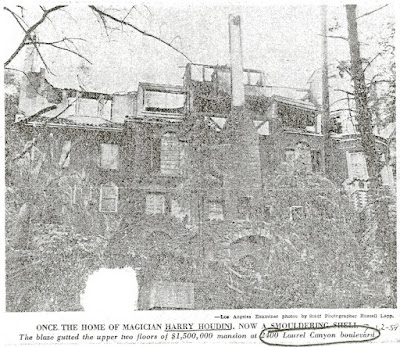 Following the fire, the Walker property was abandoned when the burnt-out mansion (above) was condemned. A petition to preserve the house as a historical landmark was denied, and the house was finally demolished in 1970. All that remained was a smaller carriage house and the sprawling system of caves and stone walkways, which for the next few decades became home to hippies and homeless, including a man known as "Robin Hood" who believed Laurel Canyon was Sherwood Forrest and would shoot arrows at trespassers. (For a taste of this time, read Escape from Houdini Mountain by Pleasant Gehman.)

The overgrown ruins were visible from the heavily trafficked Laurel Canyon Blvd, and the legend of it being Houdini's house only grew, especially when it was identified as such in the 1972 guide book, This Is Hollywood, by Kenneth Schessler. The property drew magic pilgrims from around the world. Even I trudged through the ruins with my sister and father in the mid 1970s, excited to carry away a brick from "the Houdini mansion." Of course, many claimed it was haunted by the ghost of Houdini (as well as the Green Virgin), and to this day it still gets written up in publications about "Haunted Hollywood".

But what happened to the remains of the real Houdini house across the street? According to Patrick, whatever remained of 2435 was completely demolished in the 1960s when the hillside was graded back to widen Laurel Canyon Blvd at what had been a nasty hairpin turn. There are currently foundation ruins on the hillside (also said to be haunted) which someone has tagged "2435", but Patrick assures me those ruins are for a different house. Nothing remains of the real Houdini house, not even the bluff it once sat on  (update).

Just to complicate matters, in 1991 the band The Red Hot Chili Peppers recorded their album Blood Sugar Sex Magik in what they believed to be Houdini's home. That house, which is owned by music producer Rick Rubin, sits a block north of the Walker property on Laurel Canyon Blvd. It has nothing to do with Houdini, but the publicity about the famous recording session, which includes the documentary Funky Monks, has created a second local "Houdini mansion" legend to contend with. 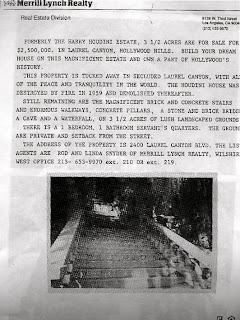 In 1989 the Walker property -- which was still owned by the reclusive Fania Pearson, then 70 -- was put up for sale for $2.5 million by Merrill Lynch. They initially listed it as "The Harry Houdini Estate" until Houdini historian Manny Weltman threatened to sue them for making a false claim (even though Manny had in his collection Bessie letterhead with the 2435 address). Merrill Lynch revised their sell sheet to state only that it was "known as" the Houdini estate.

The property was owned for a time by a man named Mark Jacobs. Then in June 1997, Patrick Williams, a colorful antique dealer from Georgia, purchased the property for $377,777.77 (his opening offer was $333,333.33). Williams cleaned away decades of brush and debris, and regularly uncovered "artifacts" that he thought could have belonged to Houdini (a pen with the initial "H" went right up on eBay as "Houdini's fountain pen"). He even developed a movie/book idea, "The Treasures of Houdini's Gardens", about a group of orphans who inherit the property and discover Houdini's secrets hidden in an underground lair.

Williams gave me a tour of the property around this time, showing me a gate that had the words "Houdini & Wilson 1919" stamped on them. (Charles Wilson maybe?) No one today seems to know what became of those gates, but this always intrigued me. If that stamp was legitimately from 1919, it's the smoking gun evidence that puts Houdini himself at the Walker estate.

And that brings us to the last chapter in the Houdini Estate story and to the new owner, José Luis Nazar. It's actually a happy ending. This is 3.9 acres of land in a very desirable area, and every time it goes up for sale I dread seeing bulldozers come in and subdivide the land to make way for a dozen mac mansions. Happily, this isn't the plan. José has preserved the property and the history, and has continued with extensive restoration, including tapping back into the natural spring and reinstalling large gates so the property is once again private. José has also opened up the estate for use as a location for parties, weddings, photo shoots, and filming. The estate now has a website thehoudiniestate.com.

José is also genuinely interested in Houdini history and, as I said, generously allowed Patrick Culliton and I to freely roam the restored grounds of landscaped terraces, waterfalls, and beautiful works of art and statuary (including a massive authentic Buddha). There is also a large bust of Houdini that looks out over the property.

We also got to see inside the old carriage house, which is now expanded and decked out with a new pool and large paintings of Houdini in every room. There we toasted -- with 100-year-old port from José's world class wine collection -- to the memory of Houdini in a house that is now worthy of the great man himself. It's a magical place indeed! 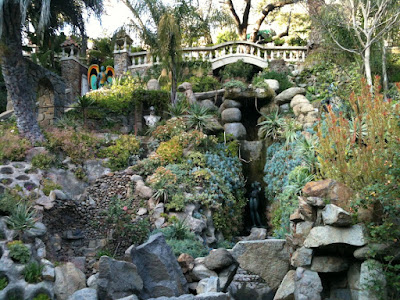 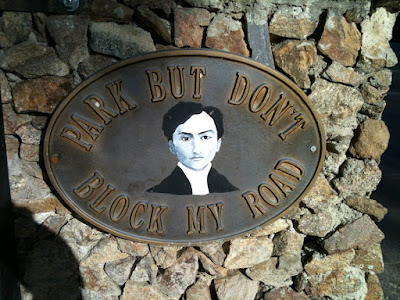