The problem with Bessie 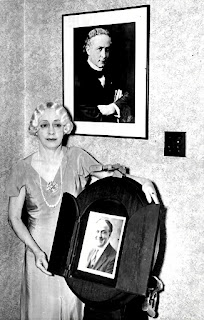 I've been sitting on this information for a long time. Sixteen years, to be precise. It's something I've shared with fellow Houdini buffs over lunches at the Magic Castle, but because of the personal nature of it, I've never felt I should "publish" it online or elsewhere. It's the answer to why Harry and Bess Houdini never had children, and it was told to me by Marie Blood, Houdini's niece on Bessie's side. As far as I know, it's never been revealed in any book or article. Until now.

Why now? Well, anyone who's followed this blog knows I celebrate Bess here and find her fascinating. But she's even more elusive than her husband. We just don't know all that much about her. What I have here is an important (maybe even critical) puzzle piece that helps further complete her portrait. It's nothing bad, and it certainly doesn't diminish the memory or legacy of this great woman. If anything, it draws her more into focus and helps us understand all the demons she was fighting.

In July 1995 I traveled to Colorado Springs to hear the late Marie Blood speak. I was excited to hear the remembrances of Houdini's last living relative. I had exchanged letters with Marie, so she knew I would be there. Her talk was delightful, filled with first hand memories of her Uncle Houdini and Aunt Bess, and she brought along a few precious artifacts, including a children’s book given to Houdini by his half-brother, Herman.

After the talk I introduced myself. Marie said she was impressed that I had come all this way just to hear her speak, and invited me to her hotel where we could talk more in private. We settled into the hotel lobby near a large fireplace and chatted for an hour or more. Interestingly, I found myself asking more questions about Bess than Houdini. Marie's memories of Houdini are limited as he died when she was still a child. But Bessie lived on for another 17 years, and even lived with Marie and her mother (Bess's sister) for a while. Marie knew Bessie very, very well.

One bit of bombshell info was that "Aunt Bess" smoked. In 1995 this was completely unknown, and it blew my mind. "Bess smoked!!!" I wrote down at the top of my notes. Marie told me more things. She said Mrs. Weiss told Bess's mother that Houdini was "born on the boat" to America. (!) She said Bess died on the train in Needles while her sister (Marie's mother) was feeding her chicken gumbo. She said the dressing room attack on Houdini was not a accident; Whitehead (she called his Whitestille) just rushed in and "bam!" She also told me Houdini loved making Chicken Paprika, which made me smile because I do too.

, then the first major biography on Houdini in 25 years, and asked Marie sign it for me, which she did. She said she wasn't really a fan of the book, particularly the author's pet theory that Houdini was impotent, which at the time was getting a lot of press (it even got a mention on Seinfeld). Marie said she knew why Harry and Bess didn't have children and would have told author Ruth Brandon had she asked. But she said Brandon simply looked over her collection and didn't show much interest in what she had to say about her uncle, so Marie kept the information to herself.

Of course, I had to ask, "So why didn't they have children?" Marie learned close, patted my leg, and said she'd tell me.

Now, throughout our conversation, Marie continually emphasized just how small and "undeveloped" Bess was. This actually delighted Marie as a child because she could wear Aunt Bessie's shoes, which were a size one! Marie said Bess was very frail and often sick, and she never weighed more than 98 pounds. But part of this "undeveloped" nature was a lifelong heath problem. Aunt Bess, she said, never had her period in her life. She never menstruated. Hence, she could never have children. That's why the Houdinis remained childless.

Doing some research online, it appears what Marie was telling me is that Bess Houdini suffered from a condition called Primary Amenorrhea. According to healthywomen.org, "Primary amenorrhea is diagnosed if you turn 16 and haven't menstruated. It's usually caused by some problem in your endocrine system, which regulates your hormones. Sometimes this results from low body weight associated with eating disorders, excessive exercise or medications. This medical condition can be caused by a number of other things, such as a problem with your ovaries or an area of your brain called the hypothalamus or genetic abnormalities. Delayed maturing of your pituitary gland is the most common reason."

Wikipedia says that "Primary amenorrhoea may be caused by developmental problems such as the congenital absence of the uterus, or failure of the ovary to receive or maintain egg cells. Also, delay in pubertal development will lead to primary amenorrhoea."

This is a pretty interesting revelation, but also tragic. By all accounts, the Houdinis loved children and would have enjoyed having them. The poured their affections onto their pets, and actually fantasied that they had an imaginary child (who grew up to became President of the United States). Bessie even told a reporter in 1911 that they had a daughter who was about to be married. Why they didn't adopt...well, that's a mystery that I don't have the answer to. 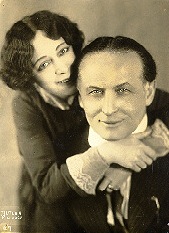 Now, just because Bessie had a condition that made her physically frail, she was certainly not weak in mind and spirit. Bess Houdini, by all accounts, was as much a go-getter as her husband. She looked after a household filled with pets and family, kept Houdini focused onstage and off, wrangled the assistants for his full evening roadshow, and even made all the costumes. Houdini would say of his wife, "All my fights when she thinks I am right she is alongside, helping me load the machine guns."

One of my favorite quotes comes from a long-time Houdini hater, Guy Jarrett, who after badmouthing Houdini in a letter to a friend added, "Bessie is screwy too." Ha! Love it. They were two of a kind. The Great Houdinis.

Anyway, I hope revealing this personal information isn't a terrible breach of family confidence. But if Marie was willing to tell Ruth Brandon (had she been interested), then she was presumably okay with it becoming public knowledge. Did she tell Ken Silverman or Bill Kalush? If so, they didn't include it in their biographies. But she told me, and now I've told you.