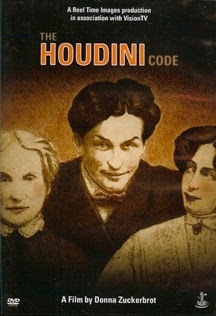 The Houdini Code is a Canadian documentary produced in 2007 that focus exclusively on Houdini’s relationship to spiritualism and the controversy surrounding the coded message delivered to Bess by the Rev. Arthur Ford after Houdini’s death.

Don’t let the DVD cover art fool you, this is a very well-done professional documentary with quality interviews and some nice rare photos, particularly of Bessie.

One thing that’s interesting is the documentary states without qualification that Ed Saint was Bessie’s "new husband."

Leading Houdini collector Arthur Moses has acquired DVD copies The Houdini Code for sale in the U.S. To purchase, contact Arthur via email.

UPDATE: The Houdini Code is now available to stream on Amazon Video.
Written by John Cox at 10:55 AM