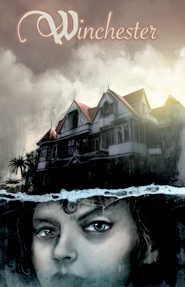 “Harry Houdini spent his non-magical life debunking the notion of a spirit world. He had an ongoing feud/relationship with Sir Arthur Conan Doyle about the existence of an after life. Spirituality was big in those days and Houdini so completely debunked a seance that he and Doyle attended (Houdini, being a magician, knew everyone's tricks) that Doyle asked him if he wasn't himself channeling the spirit world.

I thought it would be cool irony for someone who did not believe in ghosts and spirits to end up as one and to then decide to try and rule a corner of it.

Houdini did visit the Wunchester Mansion two years after the death of Sarah Winchester and he did conduct a seance there, but never really discussed it with anyone. Legend has it that he actually met with Sarah Winchester BEFORE she died, but he agreed to never speak of their meeting. Houdini is my bad guy, I think he will be a memorable one.”


Longtime readers may recall I visited the Winchester Mystery House in 2006 and reported on the Houdini connection.